Brace Yourself: Up until now, I've never actually shown the 'bad side' of Squint's face. He has no ear whatsoever, now, on the bad side. Just a long sealed up scar.

If you have a strong stomach, here is the latest picture of Squint. Know that although his looks are unsettling, he is completely oblivious of it, and a happy active kitten. *He will look better when all that 'fuzzy gray skin' is once again covered with gray kitty fur. That might take a little while though.* We know that he will live a long happy life, if someone gives him a chance. Mr.J has given him the hopeful nickname of 'Squintastic.' 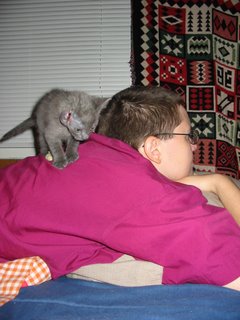 We had a 'cone' on his head, but took it off tonight. 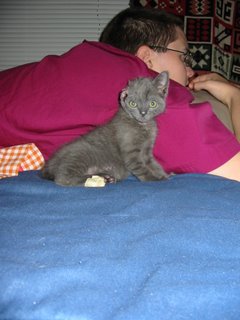 This masking tape 'boot' is to keep him
from scratching the wound open.
So far, it is working well.
Update: Little Red went to a good home with a grandfather and a little boy at the flea market. Smoke went with a lady who has many barn cats in her horse barn and said she could take good care of him.

If you don't have a strong stomach, here are some yarny stuff pictures :o) 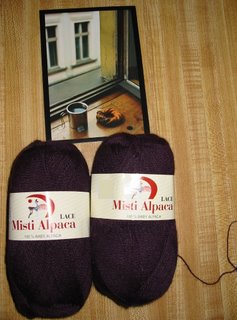 I received my prize from Knittymama's contest!
Thank you Knittymama! 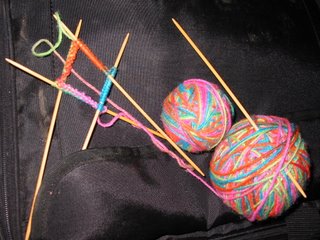 And, *gasp* I've began the second vacation sock... just barely.
Do you see the stealth pawprints on my computer bag?

I think Squint is beautiful and I'd love him up in a minute!

I think Sqint has kind of a Rakish air about him-like he's ready for mischief in a minute. Once the fur grows in he'll be beautiful. He just will be missing an ear. Can he hear out of that ear? The socks by the way are great, I love the bright colors.

Oh, poor Squint! I hope you can find a good home for him. I'm glad to hear that you found homes for the others.

Your new sock is really bright and fun!

Squintastic - I like it. And good news that the other kitties found homes.

He is so cute, even with the mangled ear!

Glad the yarn made it there safely. Enjoy, and thanks again for playing!

Even missing an ear that has got to be the cutest kitten ever! I wish I lived closer -- my kids would die for another cat.