Update (9:30 PM, our time): Hope for Squint! We were having a movie night here and someone stepped on him in the dark stairwell at the office - he is okay, except his scar opened up again. It isn't bleeding much, so it might just have been a top layer of scar tissue stretched too tight over new skin - but still, OUCH! poor guy! We took first aid to him, and might get a vet out of bed. So far, it doesn't look quite bad enough to get a vet. He is running around now, after about ten minutes of crouching on the couch, and seems relatively okay, but could use lots of well wishes! 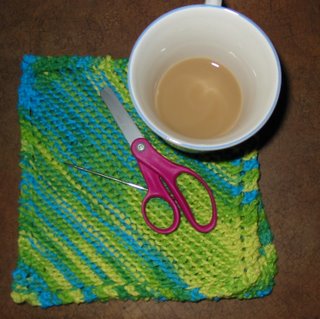 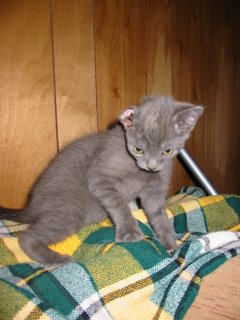 Squint has lots of fur growing back on his ear.
He also has LOTS of energy! 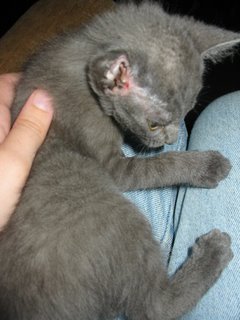 Should Squint fly to California for a promise that someone will love him forever? It is a long way for someone to come - but they are willing, and several local offers, so far, have fallen through after they see Squint's pictures :o( Poor boy!
The other option is to take him to a flea market or fair here in our area. However, if someone takes him at one of these places, they may get tired of him and toss him aside, or not take care of him when he needs it. This lady in California promises to love and take care of him, and is willing to fly in to get him! *wow* What do you think?
Posted by RheLynn at 6:05 PM

Poor Squint! He's such a cutie!

Someone is willing to fly to get him? Whoa. I don't know. I think I'd keep looking locally.

We had someone fly out to from South Carolina to get one of our farm kittens once - they knew a family member who had one. The kittens were part Siamese, so they looked Siamese but had really sweet personalities.

Ya know, if someone is willing to travel miles by plane because she loves this little kitten so much, I'd say go for it. Is it safe for kittens to fly??

Send him to Cali! Especially if you get the feel that this person will love him.

I feel so sorry for Little Squint, here in Missouri most people are afraid to give them(kittens)away-it came to the attention of some of us that they are being fed to snakes as cheap food. I don't know if its just a problem here or other places have it too. If people arent't willing to pay to have them nuetered or spayed, something is wrong. If someone is willing to fly from California to get one-they will probably take care of it. That means a lot.

Sheri got Sophie from Missouri, they flew her from there to CA & she picked her up at the airport & they're happy.

But it's always a gamble. But they are flying out there to TN to pick him up. Poor Squint! Stepped on! I hope he finds a forever family soon.

I also heard of people using them for snake food. What surprised me were the ones sold to research. I had no idea that the sellers would troll places like flea markets. Scary stuff going on out there.

Hope he's okay. I've known quite a few kittens that have been stepped on and only one had problems.

About Cali. I would talk to her on the phone and then say 'c'mon on out.' If I were swimming in the dough, I would probably make the same offer to you. I love little survivor kitties like Squint.

Poor, Sweet Squint!!! I would sure like to know that Squint makes it to a good home and I would be afraid to give him away at a trade show or flea market...maybe someone soon will offer him a home....sure wish I could!