Opportunity Knocks when you Haven't Unpacked your Suitcase

I woke up this morning to a rousing game of Kitty Suitcase Antics. Squint is both ethused and scared that our girls now consider him healthy enough to fight back, instead of just ignoring him or running away.

Here he is cruising for a bruising... 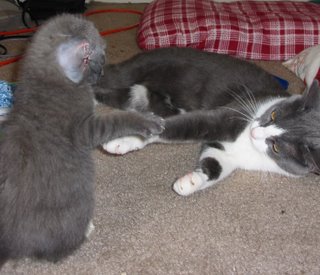 Squint shows off his Kung Fu 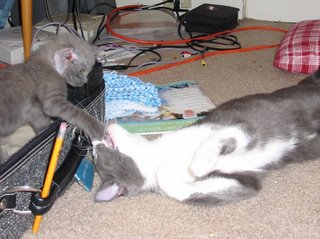 Kitty Suitcase Antics includes: jumping in and out of suitcase, dragging items that were still folded out of suitcase (larger players only) and making a remarkably loud noise most of the time.

Sally and Willow used to play Suitcase Game all the time when they were little. I know if Sally had wanted to be mean she could have knocked Squint a lot further, and a lot more often than she did. She deliberately avoided smacking him on the hurt side (at least while I was watching). She was definitely playing and getting a kick out of the 'tiny fighter.'
Posted by RheLynn at 8:50 AM

Squint sure seems to have a lot of spirit! He's so cute!

He's so darling, and it's nice to see the girls behaving kitterly towards him. Dang, I wish I could take him but I can't.

Our first cat, Cecil (who has long since passed) loved the suitcase. As soon as I opened it up to pack he'd make himself comfortable!

I can't believe how cute Squint is. I swear I would take him in a minute if I was even remotely close to you!!

And I agree with Chris, you may be getting an addition. :)

I'm sure Squint is keeping Sally and Willow on their toes! What a cutie. And I'm wondering along with Chris, are you going to add a third cat?

I love me some Squint! I think you should keep him as he seems to be getting along pretty good now with Willow and Sally! C'mon, you know you want him!

Our cats LOVE the suitcase game, too. I'm lucky to get anywhere with anything still in mine (eventually learning to close it up once it's packed, resulting in the rather unsanitary but effective stashing of last-minute items like toothbrushes in outer pockets).

Suitcases are also good for sharpening claws on.

I'm sorry....but Squint is just TOO much at home with ya'll.....I'm thinking you need to stop looking for him a home.....he looks very much at HOME!!