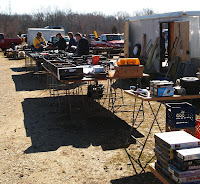 The flea market happens at the Huntingdon County Fairgrounds every Tuesday morning (fair weather allowing) some time between 7 am and noon. The merchandise varies with the vendors that choose to come and pay the fee to sell. There are usually Amish selling baked goods and butter, and Mennonites sharpening knives and selling household goods. There are also coin dealers, tools, 'antiques' and usually a large variety of animals for sale. 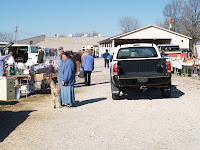 This lady was walking her pet goat around on a leash. 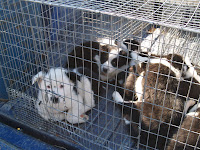 These border collie puppies were for sale today.
We took the white one out and talked to a him a bit - but he had obviously not been handled before - and did the 'freeze puppy' pee and squall as soon he was away from his litter. A moment later he was happy and talking to us, but no more puppies here! The owner said his name was 'Snoop.' 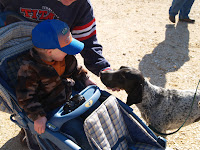 Kelba got to talk to a little boy as well - who was very interested in coonhounds. She tentatively sniffed the 'people's puppy' just the same as she sniffed the border collie puppies in the market.

In other news: I've finished knitting one of the dishcloths for my mom's birthday, which is March 6th. I'm also prototyping a new type of rabbit for the shop. The first prototype I made frayed at the edges (calico fabric) when a mistake was ripped out - and now I'm working on a second one out of felt. At the moment, Mark says it resembles a Cthulu more than a rabbit.. but there are still things to get sewn up ;o)

Flea markets can be so much fun. Looks like you had a good time.

I don't know who Chtulu. Is it a picachu? Not up on Anime.
I love the bear!
I think the lady with the pet goat is a hoot!
She looks familiar.
Guess there are people who have familiar faces all over.
How much time per day are you getting to work on your animals and weaving, and art? I think it would be good for us to know to help us plan our own days too.

one of my absolute favorite things to do when we go to my grandmother's in York, PA is flea marketing. there's an *amazing* weekly farmer's market/flea market there that's been a staple of my visits since i was a kid. it's serious amish/mennonite country (lancaster county), so i loved your description! all the amazing baked goods and fresh produce, livestock auction (ok, so that can be kind of depressing, but i still love to see all the animals, i can't help it), the best baked goods in the whole world, all manner of arts and crafts and tools...