A logograph: (or logogram) is a single grapheme(written symbol) which represents a word or a morpheme (a meaningful unit of language).

An ideograph: (or ideogram) is a graphic symbol that represents an idea, rather than a group of letters arranged according to the phonemes of a spoken language, as is done in alphabetic languages. 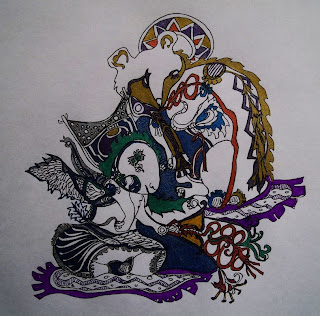 Description: These are two very different 'unseen' or 'spirit' forces - yet they are meshing some of their properties into a stream coming out between them (from one's 'paw') There is a sense of overcoming something and yielding prosperity (the flower(s) in the end of the stream).

States of the Protect and Vulnerable 'shields'

Although not particularily about 'protection', this drawing shows several states of the protection shield. This symbol shows up in almost every drawing I make. An empty black circle (or void) is the 'vulnerable' or opposite of protected. This symbol's state (protected/not-protected) is used to both show where certain figures are strong, and where they are weak. It is also often applied to one figure from another by some sort of touch or flow - trying to share protection or wish it upon others.

Positions most prevalent: knees, heels, heart/spine area, foreheads, stomach(womb) area. A shield upon the hand means 'protector' instead of protected. The young usually have voids upon their heels - but there is usually someone in close proximity that balances with a protection shield.