Linky: cute baby okapi at the Brookfield Zoo in Chicago 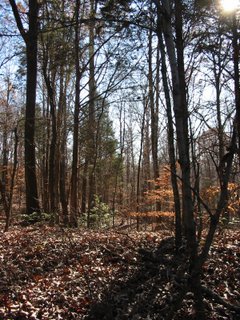 A little of that sunlight quality
coming in through the forest
on the way to the office.

We went grocery shopping at 11 pm last night - Mr.J is BIG into Thanksgiving. He was positively grinning in the car all the way home, because he had stocked up at the grocery store. He even found a vegan apple pie!

I've been working, trying to get things done, but also have managed about ten minutes with my sketchbook in the morning sunlight. I like to work in the clear white sunlight that comes in the early morning. The white paper seems to glow, causing every black line to resonate. When I was at the college, the old drawing studio had a specific place that caught both the light from the skylight above and the windows to the South. When no one else was there - I would pop in, drag out my board, turn on the classical NPR radio station and 'jam.' At least - as far as I ever 'jam.'

Working on this dragon, inspired by the dragon mailbox I'm painting for the office. It's far from done. 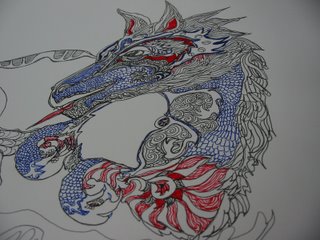 I have a bad tendency to 'overdecorate' when it comes to ink works.
Sometimes, it goes too far and I start over, wasting 5-8 hours of work. After this many years - you would think that wouldn't happen as much, huh?


Toy shop is behind a little - maybe I can catch up tonight or tomorrow.

wow you are really talented. I so envy the talent to draw, I can maybe manage a stick figure, maybe.

Thanks for visiting my blog. Your drawing is really neat-what talent you have :)

We have a few things in common besides CIC. I have two sweet cats and will be having vegan pumpkin pie for Thanksgiving, too. Hope you have a great holiday.

Hi Rhelynn, just a quick note to tell you that you are the winner of the Interweave Knits Fall 2006 book from my contest. If for any reason you dont want the prize, just let me know, but I will need you to email me your address so I can post it off to you. Thanks Sue

Breathe in, breathe out - and relax. Enjoy the holiday!! Please don't run yourself ragged...

Thank you Sue! Wow you are all the way in Australia!

Rebekah and Karen: Thanks for the nice comments on the drawing.

Chris: Trying not to - we just decided to team up with our boss for a combined kitchen Thanksgiving -- hopefully that will be a help and not more stressful!

Happy Thanksgiving! I echo Chris and say relax! I hope you have a nice time. I love your dragon drawing - you are so talented!

I don't see a cute baby okapi in that picture. Would it help if I knew what one looked like? ;)

Wow, nice dragon! he doesn't look overdone to me.

I had no idea you had this talent! What an amazing piece of work! I can't even draw stick people....

Awesome ink drawing! Looking forward to seeing the completed piece. You are so very talented!