CAUTION: GEEK SPIEL
We were up until 2 am last night working on the network at SovereignIT's latest 'gig', which is deadlined on Monday... sort of. We still have some more work to do today. This particular office has phone lines and network lines going every which way, that have to be hidden in the walls (it's a 'professional' office, where customers will come). 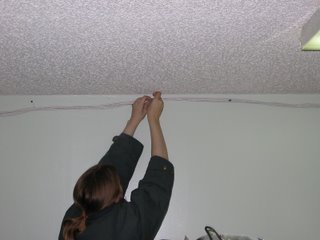 Drilling holes and stringing wire.
The part I hate the worst is feeding the wire through a small hole near the ceiling to try to fish it down to be grabbed by another wire (clothes hanger) and pulled out a small hole near the outlets. This is tedious work, and we already ran into some OTHER electrical wiring in one wall that wasted a good hour's worth of work last night. It's been years since anyone knew what was in those walls, apparently, so we had to choose another place to put that box and cover up the unused holes. 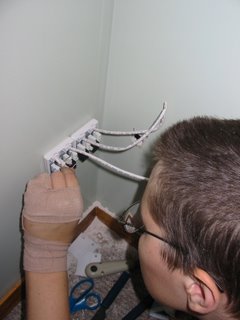 Mr.J is doing great at all of this - trying to do a little too much maybe. He is actually hooking up the CAT-5 terminal boxes with only two fingers and a thumb. Plus, he is 6'4", which means he doesn't have to stand on a chair to feed wire in at ceiling-level (WOW). 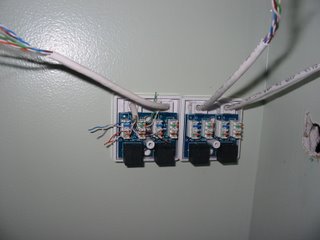 Cat-5 box half wired
At 1:30 am we realized we were short a few pieces and our boss down at the SovereignIT office a mile away had apparently went to bed... so we called it a morning.

We'll be heading back out there after grabbing those supplies at the hardware store. And, after all the fun physical wiring is done, we get to make 'the magical network stuff' happen as well. 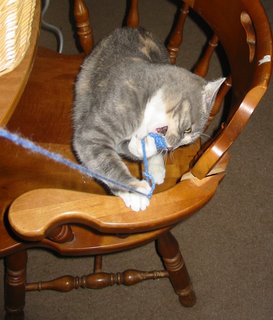 this morning Willow says: 'Play with me!'

Make some time for sleep,too! Or knitting. You know, to relax!

Just don't fall off the ladder too. One is enough.

And oh yeah, do that relaxing thing!

Oh my gosh, this sounds like an extreme load of work that you had to face! Yay for relaxing, I hope you'll be getting enough time to sleep - and knit now! I love that pic of Willow by the way, what a cutie!

Hopefully it all gets done and you can both take a little break!

Looks to me like Willow is trying to knit!

Looks like Mr. J is not letting a little thing like a broken wrist get in the way! I admire his stamina!

Nothing like a little wiring to brighten your day. I feel your pain.