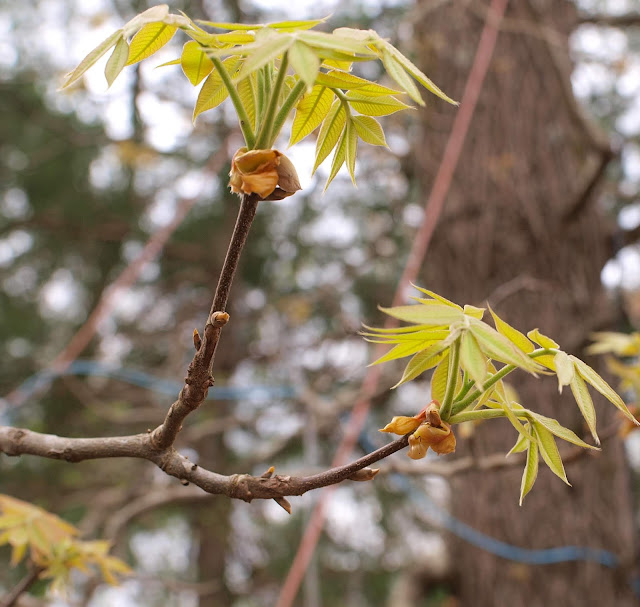 Took a mile walk this morning, still in the COVID-19 quarantine.  Our schedules are all off -- I am up at 3 am making soup, Mark is just getting to bed, and Esme won't wake up until 10:30 in the morning.  This is not like us.. but we have about two weeks more until school starts back up.. unless they cancel it for the rest of the year.

I ;am still deemed an 'essential' worker in both of my jobs - postal worker and medical technology service - but the actual hours are few and far between.  I do not see many people.  So, there's that.  I went out to two medical tech jobs the other day and wore gloves for both.  I'm doing what I can for those patients - even though I can't stay entirely at home.

I love the stages of the hickory trees, and the redbuds, and the dogwoods.  The sarvis (serviceberry) trees have finished now with their flowers, falling away to green leaves only.  The dogwoods that are blooming now are a green color and large flowered.  The more delicate white flowered ones will be popping in the woods soon I'm sure.  It seems like it was just a few months ago I was photographing them -- but I know it has been nearly a year.

Time has been so odd this year, even before the coronavirus, with changing jobs and getting through the anxiety of that - then Dad died in October - and I had a lot more anxiety and PTSD type epiphanies.  But  that is a human response, and I am feeling like I've swum to the other side of the shore.

I made soup, following my nose.
I'm a champion at thinking up weird combinations in my sleep... woke up and decided to make onion soup at about 3 am.  Then, as I grabbed for ingredients, things fell together to this.  The actual soup looks awful - kind of like the shiitake mushroom tapenade someone once tried to make with me - and it was so awful the cats and dogs wouldn't touch it..  But, this was amazingly good.

It started with waking up thinking about onion soup.  I have eaten a couple of cans of French Onion soup the past week and found them very satisfying.  But - looking at the recipes for how to make it from scratch did nothing for me.  It wasn't right for me.  So, this morning I was thinking I would just start with olive oil and onions and see where it took me.

I put in the spices, and then I knew I wanted the brown lentils.  Then the thought filtered in about the bouillon.  After all of that was together and bubbling nicely, the miso soup that came in the mail the other day entered into the edge of my mind and I added that in.  It was when I put the tofu soup packet in that I smelled the little bits of seaweed that are in it, and it made me think - I bought sheets of kombu last year for soba soup making.. which I've only made a couple of times since.  They were still in the cupboard, waiting.  They add a lot of salt, along with the bouillon, so NO need to add any extra.

After I had let that entire combination boil then simmer for an hour or so, I took the stick blender and gave it a few careful pulses.  You could pour the whole thing in a blender and do the same thing.  I am always careful about hot soup - volcanic bursts onto skin if you do it wrong etc.  But a few pulses was all it took to wake up Esme, too - she had slept through our entire conversation about 'soup at 3 am' but the stick blender woke her up.  She came out and looked at it, made some comments about games she had been playing, and went back to bed.

To serve the soup I put in an extra fresh grind of black pepper and a full teaspoon of hot madras curry powder right into my bowl.  It was one of the best things I've eaten in a while - but yes - it LOOKED gross.  Nova dog highly approved when I woke up at 8 am and had more for breakfast.

This camera has better eyes than I do - it almost gets down to the grain of the wood and the 'feather and fur' of each little leaf. 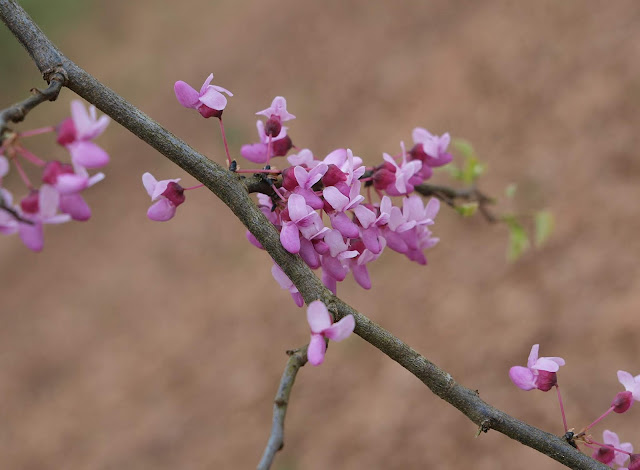 There was an ant crawling in the redbuds, and bees buzzing everywhere.  I couldn't get any of the insects in focus, but I wanted to remember that they were there.  The sun was coming up over the trees behind me and it made the redbud glow. 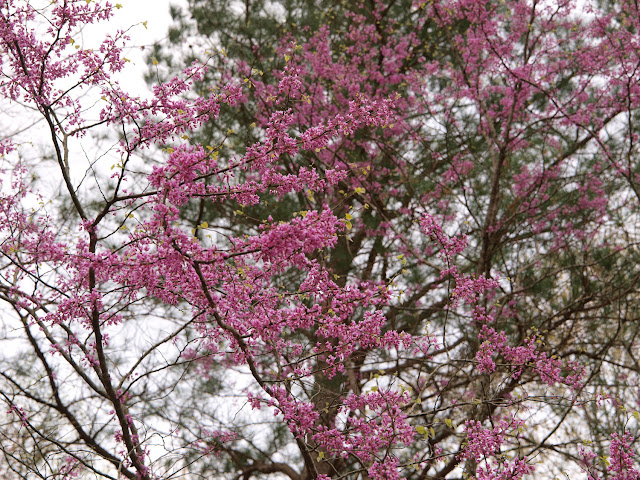 My right ankle gave out on me, as well, this morning.  It sent me crumping to the ground just like that time I was pregnant with Esme.  I remember that one often because I was so scared for her.  I fall down in this way quite a bit - just the other week in the garden, as well, but that was the time I had to worry for more than myself.  I was also thankful this morning I wasn't carrying the camera yet.  But, because I was now bleeding from my hand and knee - I was even more determined to capture some images of the things that were unique about this morning, the things that turned a walk to the mailbox into an expedition.

The red brown brush beside the road always piques my attention.  I wonder if there are many other people who find it as beautiful as I do.  This, and the red gold grasses bring me back to a time in the field at Arbo Road - standing in the middle of the sky, one tree to my back and a full circle clearing farther than I could run in one breath to all sides.  I was alone with the sky and the tree there.  I spent a lot of time there, far beyond the garden, but not too far Mom couldn't hear me when she yelled.  I sat at the base of that tree and thought about my ancestors, about my future, about the woods around me.  I was a deep little nine year old.. but there was something about that place - something it imbued me with - that comes back to me when I am out in the grasses.  It is one of the reasons I like to drive up by Martin, TN, too - the wide open sky, like an eyeball looking down on me from above, and the grasses, and the trees like eyelashes at the edges, waiting to blink. 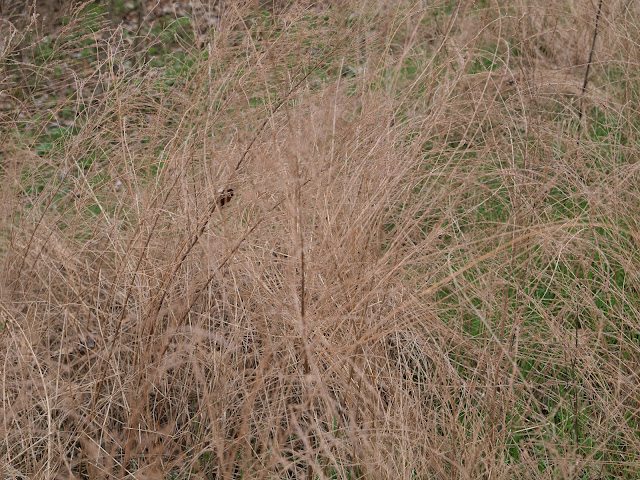 Red brown feathers, delicate structures.  They seem to shine almost pink and looking through them is like looking many strings and webworks repeating over and over to infinity.  When it rains, they collect shining drops of water in their branches and intersections.  When it frosts, they collect tiny crystals of ice.

I think I spend more time looking at the tiny bits of plants around me than most people - it is something I find joy in, the changes, the differences, the transformations. 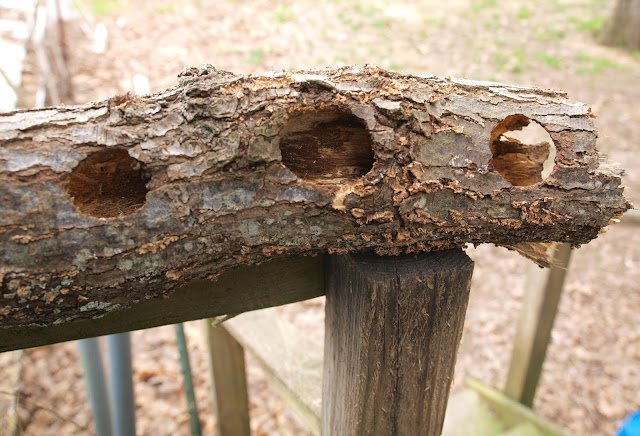 Mark found this out in the driveway yesterday, he says a woodpecker has been hard at work on it.  It was almost hollow inside - insect work that the woodpecker then went after the insects?

I'm sewing up the ends of dischloths, knitting on yet another lap blanket, bright green this time. Our black tortoiseshell Minion is truly enjoying where the pink one ended up I made over the last few months. 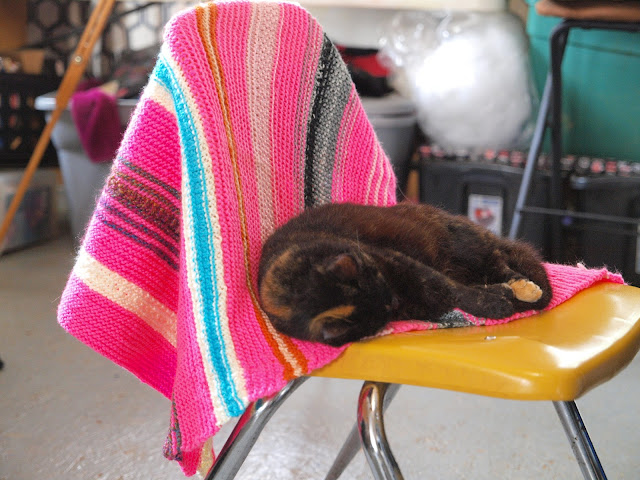 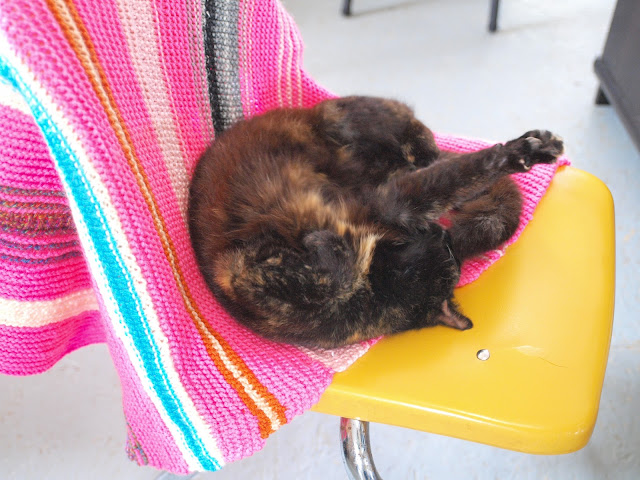 Besides that , more soup, maybe a bit more work in the garden.  It is supposed to rain today so I don't think it is right to put the seedlings out to day.. but it is so warm it is almost there.

We also finally downloaded the game GardenPaws, and it is very sweet.  Esme and I have been exploring that new world and discovering all of the creative things to do in it.
Posted by RheLynn at 9:01 AM