How to play Build an Empire style Minecraft Survival 1.15.2 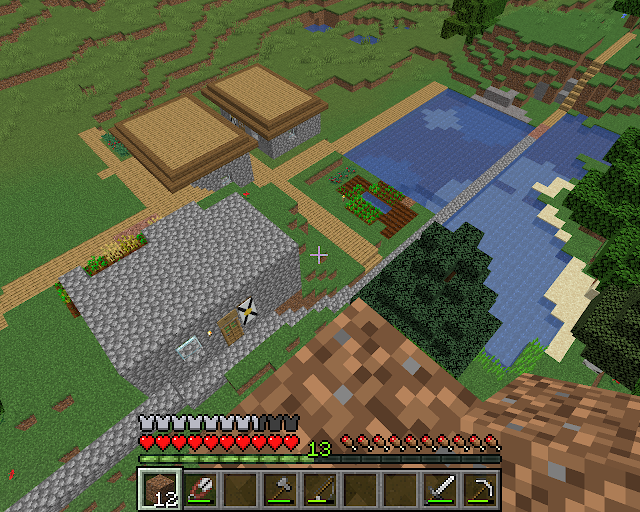 This is another flavor of Minecraft I play in Survival, by myself, or on multiplayer LAN.  If you are playing multiplayer you will have to make some considerations for destruction or anti-griefing.. but this game can be a challenge against yourself if you do not have others to play along. 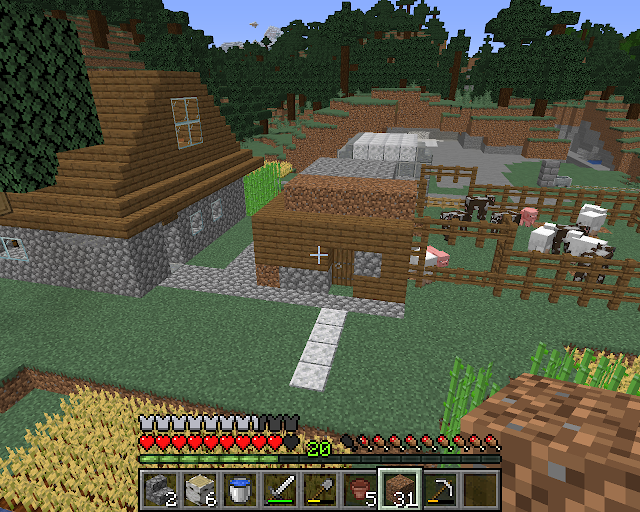 The biggest thing is that you are expanding from your spawn point, not dying from monsters (much), and increasing resources from 'town' to 'town' as you build across the map.  And roads.  I build roads in all directions eventually, leading to each new 'town' with its own resources, mines, crops and animals.  Each village not only become self-sustaining, but also provides 'exports' to other villages of things it specializes in, or has been lucky enough to have a lot of in its area.

For example, when you find a village with carrots and beetroot etc that is the time to send those 'exports' to the gardens of other 'towns' you have built, and bring some of their excess materials back to this 'town'.  It is kind of like the Spanish explorers bringing tomatoes back to Europe after finding them in the New World. 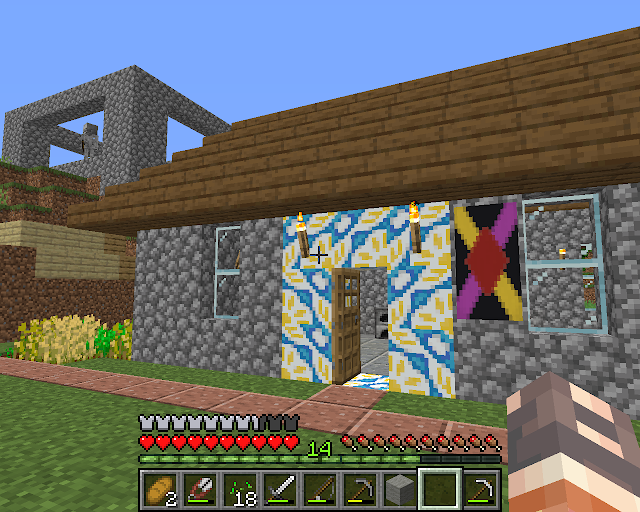 Be sure to light all new structures, as you can see there is a skeleton in the unfinished building in this town!  This town was lucky to have a black sheep that could be caught, and the black banners then get different dyes put on them that are available all around the building site. 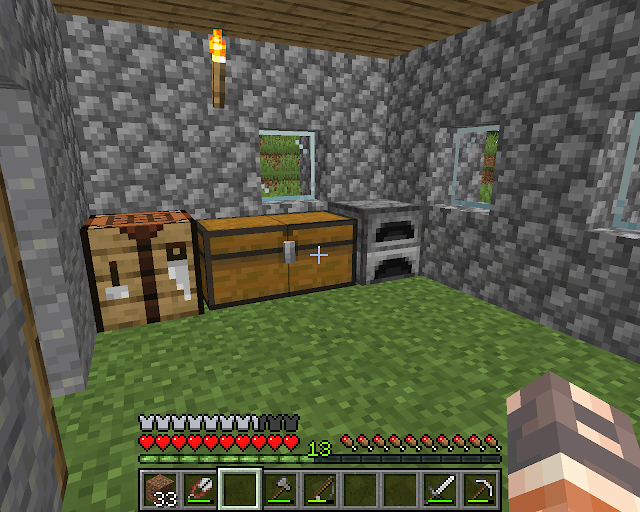 Start with a single house and garden in each location, for survival.  Build up your tools, your food supplies (We're on MONSTERS mode, and we have to eat!), your bed, your mine etc.  Each additional house you build in the area gets a small stock of food, resources and tools, as well as the furnace, chest, minecraft table, doors, windows and bed.

Why more than one building?  To make it a town.  To store more stuff.  If you were on Creative you could throw a few villager spawns in each one, but really - I just imagine that the more resources I can build up, the greater the buildings expand, crops, streets - and that town starts exporting colonists (me) to another location via another road, and building again. 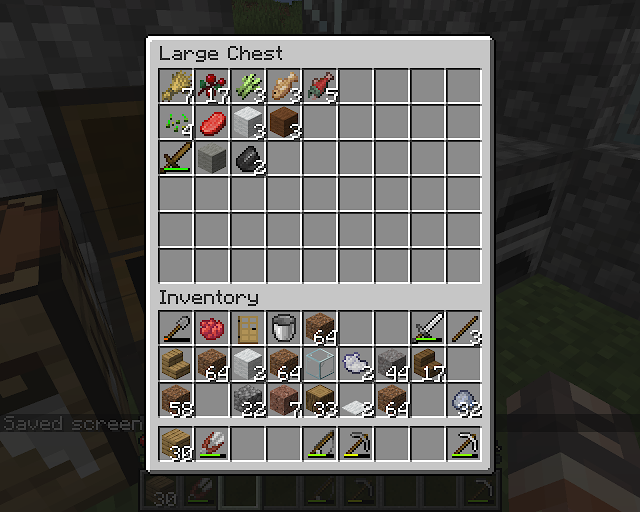 Some basic supplies in a chest 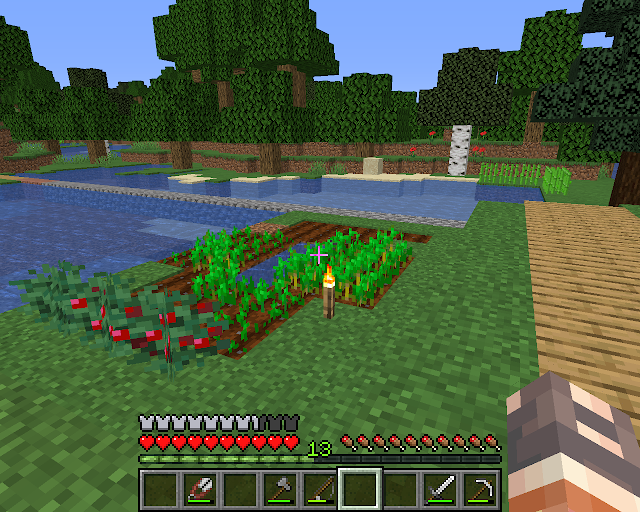 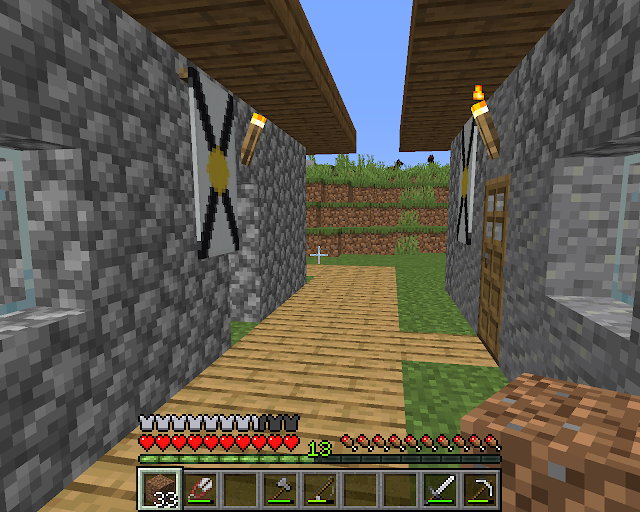 Each town also gets a sign on its main building telling the name of  the town and its own banner motif to tell it apart from others.  In 15.1 you will need to kill a spider or two and build a loom - as well as have sheep and dyes, to make the banners.   The colors of the pattern should represent whatever sheep and dyes are available in that area.  This town was pretty rich to start - so each building got a copy of the banner. 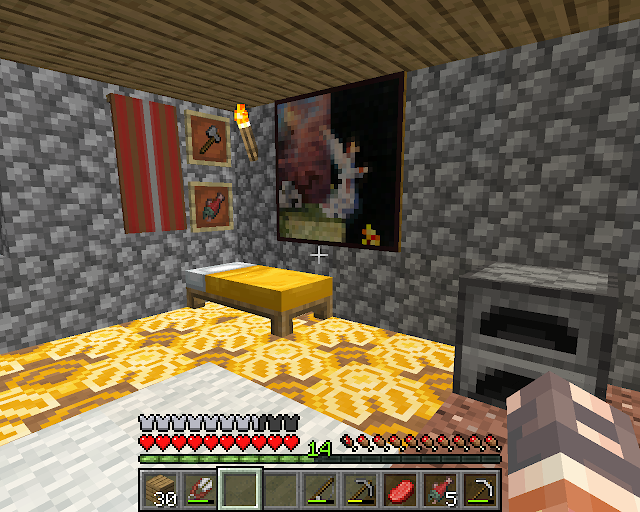 As resources increase, the rooms get fancier, buildings might get taller or rebuilt, and specialty buildings like a town hall, library, blacksmith or magician might be built.  Really really rich areas might have a castle surrounded by several small peasant village homes. 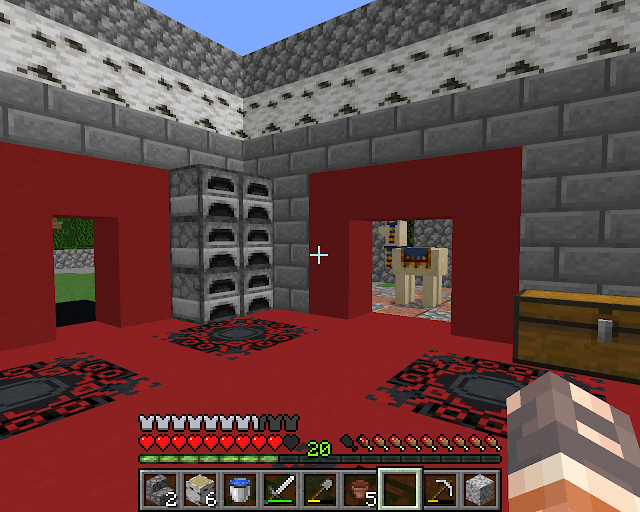 A castle being built with the resources from two towns 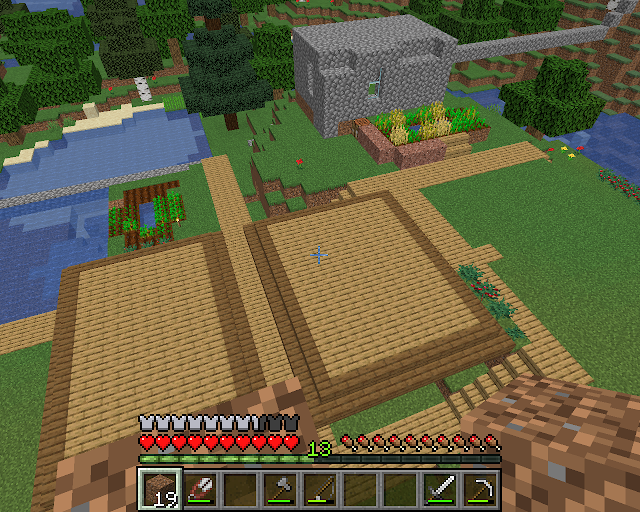 This town had three completed buildings after a week of Minecraft days since the 'colonists' moved from the main complex.   When I set off from the other complex I had some food, my tools and armor, 3 wool and some wood.  Everything else at this complex came from the land surrounding it. 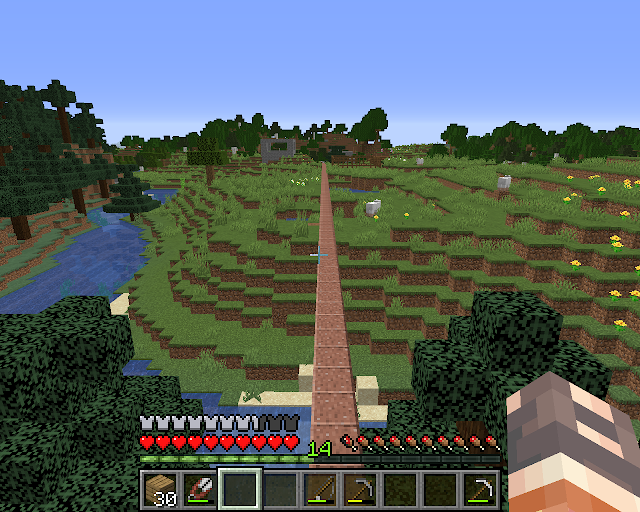 The road from the original town, with an unfinished building three houses and the start of a tower. 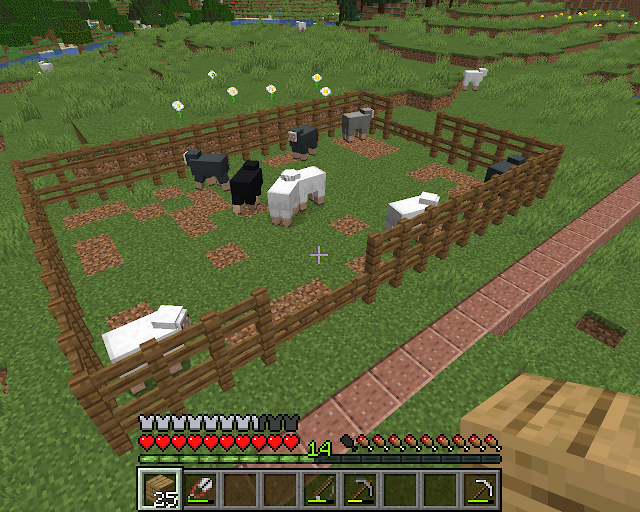 The original town also had a pen full of sheep 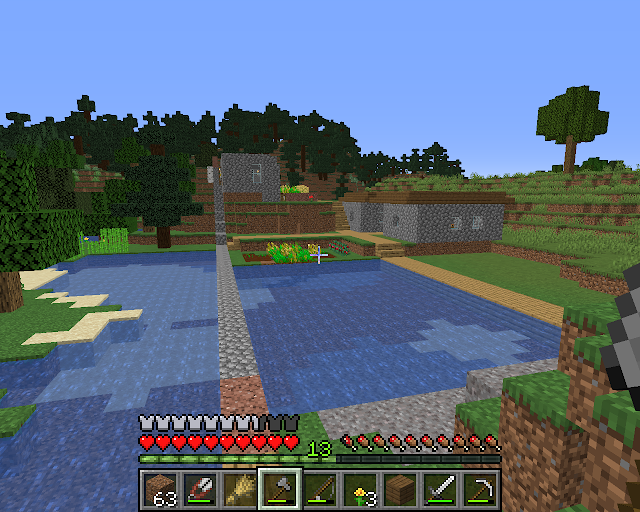 The second town has a road continuing off into another biome, and ready to start again or continue to build in either one.  I might go finish the tower now, or add two more buildings to this one and a sheep pen before I continue on.

The nice thing about the Build an Empire style is that the road is endless, the accomplishments are what you decide on for yourself and over time, it rises and falls at each place.  Just imagine - what happens when a creeper destroys half your village?  Do you build again?  Do you make another colony?  Can you transfer your livestock between towns, or your riches to some central castle?

After a while, what is the history of your Empire?  There is one - you were there.  Form a story in an actual Minecraft book or signs saying what happened where and when, and come back later to read it.  In what year did the Illagers come and attack?  When did you build the cathedral with the stained glass?  When did you set off on your first ship across the ocean?  etc.

I really like to play this style of Minecraft in Biomes o Plenty as well, with HarvestCraft - except that it just keeps adding so many windy gardens and so forth that the landscape gets flooded (I've heard there is a settiug to town that down but then I hear there isn't...)   Biomes o Plenty really lends itself well becasue there are SO many different region-specific resources, and different kinds of food etc ..try really hard to get oyster sauce as an export good!  It takes so many ingredients it is difficult to even have one to put in an item frame - if you are doing it all on survival!

I had one game of this style that had more than twenty different towns , each with more to offer, different crops etc.  Eventually, when 1.13 came along, I tried to play this way there but it just wasn't as fun in Vanilla 1.13.  Now with 1.15 they have fixed a bit more with bees, fishing, turtles, ocean environments and more villager things that I have started to play vanilla again.
Posted by RheLynn at 10:44 AM