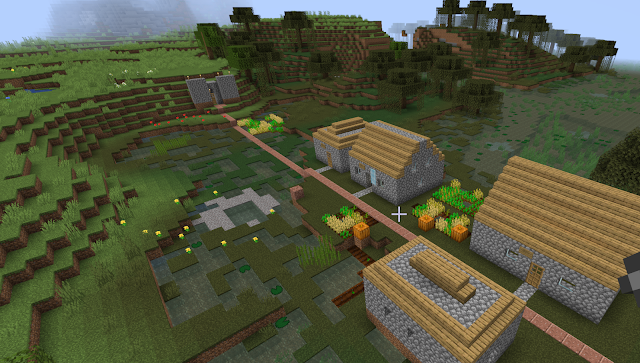 This is an example of a spawn point town, in  swamp, using the available resources.  The houses have a cohesive style, but they have some individuality, too.  This town is called Cantrall (after the courthouse Abe Lincoln stood his first case in, I don't know why, it popped up in my head and I ran with it)

The original 'house' is built into the side of the hill and becomes the city center.  It contains the mine down to bedrock, a bed, a loom, and the beginning storage chests.  This is played with Monsters ON, and Normal mode.  So, the player is going to get hurt (a lot) and need to eat (a lot).  Luckily, there were some sheep and chickens to the North.

The very first thing is cut down a tree or two, make a crafting table, get a wooden pickaxe, mine some stone, build a shelter with a door, and build a furnace to burn some logs in to make charcoal for torches.  You might get lucky and find iron or coal but you want to be in a small shelter with a roof, a door, and torches before the Sun Goes Down.  Or, you're toast... in the middle of a zombie/spider/skeleton sandwich.

Make a sword.  You will need it before you want to need it.

Have extra torches, and an extra tree or two worth of logs to make more sticks for torches and tools.  Then go mine, and hope for iron.

If you can't get a bed right away (and you probably won't, because unless you go killing your sheep you will need to mine iron to get shears).. then stay underground with lots of torches until daybreak, then go back out and collect wood, kill fish in the lakes for food, gather kelp (if you're by the ocean) and dry it, etc etc..

Start building your farm as soon as possible.  I killed four spiders right at the beginning, so was able to make a fishing rod.  I also collected every apple from every harvested tree.  Food is no joke.  Get your gardens and food sources producing and make sure some is stored for later.  It's just like a real town in that way.

When you are comfortable with surviving  - and have your necessities covered, you can burn some sand for glass and make a fancier shelter on top or beside your emergency shelter.  You can also begin to plan your town with roads, fields, and footprints for houses.  You will end up with lots of materials from mining, so use your creativity! 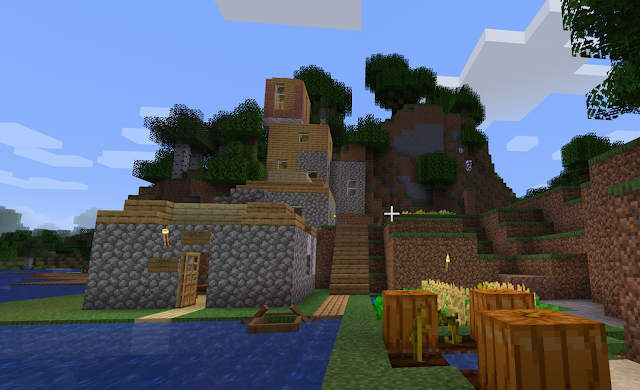 Give your Towns Unique Identity - with Names and City Colors

Each town needs to have at least one custom banner, and a wooden sign saying the name of the village.  So one of the first goals of the city center, beyond food sources, is to have shears, a bucket and a loom.  Iron and string - not easy things to get for each village.  It's the basic 'iron age' technology.

Let your town have 'roads' and fences and a real flow of moving around from place to place within the village.  You might build it into the side of a hill and use the natural landscape, or flatten it out and start from a big square plane.  It's up to you.  And you can do something different for each place, evolving over time.

A Real Town would have Population

Villager mobs can be very annoying and take up CPU power, slowing the game.  We will experiment with those in another 'style' of Minecraft, where we don't expand across the entire world - which by itself takes up CPU power.  For now, we will just pretend that we have people in these houses, and that these people are here for a reason.  Each one will have a working house (as if you wanted to spend a Minecraft weekend there) and a 'job' that makes sense with the town.

For each 'imaginary villager' in a home there will be a separate bed, and a separate chest.  That means wool, and wood is needed for those things.  There will also be a crafting table and furnace for every house, usually near the entrance.  Each house needs torches for lighting, and glass for windows.

The kinds of 'jobs' you will be doing indicates what kind of population the real 'town' would need.  Farmers - the more fields, the more houses you might need to build.  A fisherman?  A woodcutter?  This town also has a paperworks (for the sugar cane farms) and a baker (where do you get your bread?)  It will need a sheep paddock and housing for the sheep farmer.

When you can - Specialize

Have lots of wool and a field of colorful dye-producing flowers?  How about an artist shop with paintings?

In one of my towns there was a large amount of gold and redstone found deep underground.  That town became the first (And only, so far) town to have a clock tower building, sort of like a miniature Big Ben.

If you REALLY wanted to get bones about it - you would provide in the 'villager' chest food, tools and clothing or armor.  But THAT would be going pretty far.  In a richer village, each chest would have some example of that to show someone 'lives' there - and the floors would be decorated with wood, carpets, glazed terracotta, brick etc - with item frames and paintings on the walls, terracotta flower pots and cauldrons - all the trappings of a town. 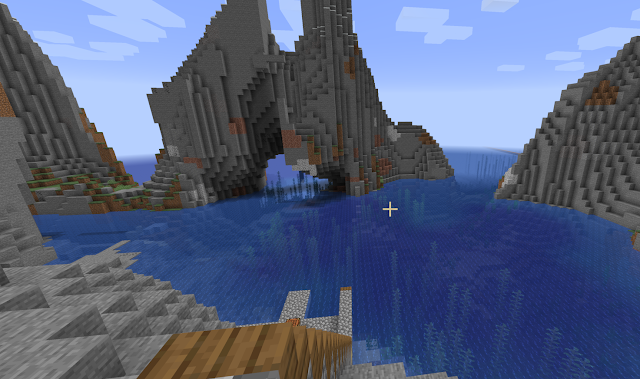 Get Yourself a Great View

The joy is in the journey - but you will know you're making progress by expanding your territory.  When a village is self-sustaining, make yourself an 'export' building and chest - and begin to put excess food, materials and special items in there to 'seed' a new colony.   You may build roads in each direction trying to find a new place with unique resources, or a pretty view, or a different biome etc, to build the next town. Once you have scouted out a place - or before (if you're brave), head out with only what you can carry and build the next 'city center' to expand your Empire.

This World is an Island
Like to play islands?  This one spawns on a small island that may or may not have enough sheep to breed a population from.  There are a few trees, and some ores in the ground nearby.  If you really can't make the island work for you there is another larger flower-field landmass a distance due East...
Try it out - version 1.15.2 Vanilla
seed# 8746182473153761204

Note  If your town is an island, you have a unique opportunity to learn to reserve, multiply and expand your resources.  Trees are precious, as are wheat seeds and animals.  Beware creepers don't destroy everything!  How much space do you use for fields, and for buildings -- do you pull dirt from underground to expand your landmass in the water?  Don't spring a leak in your underground buildings while you mine!

To navigate away from your island (without just writing down coordinates at each place) - build a spire 20 blocks or more high and place a torch on top of it.  If you jump down into the water (and not onto the land) you will not hurt yourself.  Then, when you have built your boat, you can place your back to the spire and head off in a direction, and - if you build a spire on your newfound opposite shore, you have a landmark that will allow you to return back home 'easily'.

Goal : Self-sustaining villages that provide protection from monsters, and food for the player.  Iron and other resources.  'Domesticate' and breed flocks and herds of animals.  Create roads, signs and / or landmarks to allow you to navigate your Empire from place to place.  Export materials to other colonies and share materials and resources like a real Empire would - a system of 'trade'.  Explore!  Try to collect as many unique materials as you can and distribute them across the 'known' world.
Posted by RheLynn at 8:13 PM