A neighbor of ours had another grandchild - and I was inspired and feeling a little bad that I didn't know they were going to have their second so soon (I'd seen her, registered it, but not how long)... so I did some sewing.  A stack of burp/change cloths and a dog toy for his older brother.  The dog is built from the Purl Soho Pup pattern - which I actually almost followed to the letter.  I hardly ever use anyone else's toys patterns... but I liked the gusset on this one 'bottom of body' they call it. 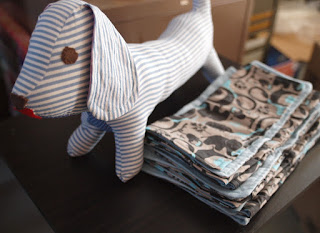 I'll probably size it down next time I make it.. this was full size from the PDF.

Esme did a little cooking (with our help) from her Christmas gift cookbook.  Bacon wrapped hot dogs.  Enough grease to kill a horned endangered beast.... but I served that with apple for lunch.


And now Mark is working on a project downstairs.  Esme is coming to terms with her friend not being available to play with today... and I'm tired.  I sat in the sun on the bed and knit about three rows.  But I think I might have to take a nap.  I close at the store tomorrow and then open the next day... but I agreed to that, so someone else could switch shifts.
Posted by RheLynn at 1:14 PM