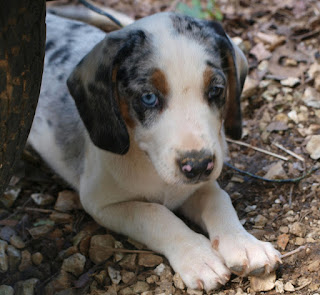 Our Daphne deserves some love, too - I wrote a Niume post about her heroism :)
Da[hne, our Catahoula leopard dog

Article:
I realized, in my post about Sweetie, that I really don't give Daphne as much credit as she deserves.  She has a different kind of quiet intelligence and a deep loyalty above all else.  She is always happy and sweet, but not always understanding the breadth of the situation.  Several times, though, when it got down to brass tacks, our Daphne has helped save the day.

She was born in the Summer of 2012.  She was so beautiful - with more white on her than we thought was possible in a Catahoula Leopard Dog.  In fact, we read up on it and found that we should worry about her hearing, as part of her ears were white.  In Catahoulas, the merle gene (blue eyes, 'blue' spotted coat) can cause deafness in some dogs.  We knew we were going to keep Daphne, because we worried she might have a hearing problem and/or pass it on in her genes.

Also, she was incredibly sweet.  A ball of chunky puppy with one blue eye and one brown.

She was 'White Ears' for about a month, until her name struck me.  She was a little like Daphne, from the Scooby Doo gang.  So, she has been Daphne or 'Daffy' (to my husband) ever since.

Here she is one of several puppies playing tug of war with a rope with our daughter.  The light just shined on her in this picture and she was looking at our daughter with adoration.  One of our cats, a Manx calico, tried to adopt her at this time.  She would stomp around with the puppy at her side leading her up and down our road.  We called 'Mouse' the general and she was training Daphne up to follow her.

She grew, and became longer and lankier, as Catahoulas do.  This picture is her at about a year old, snuggled up against the cold weather on a beanbag.  We were glad to find out she did not have a hearing problem, she just had a different personality than many of our other dogs.  She likes to sit back and watch, and ask the other dogs what she should do next.  She was Loula's right-hand dog, for the longest time.  Sweetie and Spud were born about this time, and she was a loving big sister to them.

I'll relate the tale of the goat again - because Daphne showed her true colors that day.  We had a goat that had died of old age.  We went to our local family that raises goats with Pyrennes and they recommended one to us that knew dogs and would live with them.  'Kitty' was well taken-care of by the elderly lady and adapted to our pack quite well, dancing and trotting along with the dogs up and down our road.  For several months they treated her like a younger dog, taking her a bit further the longer she kept with them.  We tried to keep her to a leash, but she often found a way out of it.  Chewed collars and busted carabiner clips were a usual sight.  One day, she went running up the road with the dogs and out of sight.

Our daughter and the 'kitty' goat, a Nubian dwarf cross

Several of our dogs came back without the goat, but Daphne and her sister Loula stayed with her.  We called and waited and even went through the woods, not sure where on our property they might be.  Then, about eight o clock that night, as the sun was starting to set... here comes Daphne and Loula, one on either side of a seriously muddy goat, herding her along the road until we could come out and click a leash on her.  She had obviously been stuck in mud up to her armpits, and they had somehow (we'll never know) lead her out and forced her to come home.  It was quite a sight.  And we were so relieved.  They were both heroes that day - and the goat went on a lead after that when she wasn't in her pen.

Daphne in the back, Lucy in the middle, Sweetie at the front.
(oh, and a cat)

In the Fall of 2015, Daphne and Sweetie and Spud all chased the UPS truck.  They escaped through the door before I could stop them - and they were off running.  Spud came back that night.. but Sweetie and Daphne did not.  We were very worried.  We sent out calls to all of our neighbors and Facebook trying to see if anyone had seen them.  We called the shelters and the sheriff, too.  Sweetie came back on her own two days later - much to my relief.  Daphne, though, was still missing.  I gave up hope, until one day after Christmas - a very very cold day, a thin Daphne appeared on our road.

Everyone was so happy to see her, they crowded around her, licking her face and welcoming her
back.   She had been being kept on a leash somewhere - and her neck was a bit raw from straining against it to escape.  My husband was very angry at this but we didn't know where she had been.  We never found exactly who had tried to keep her ... she is a very pretty dog but they must have known someone was looking for her!  We were so happy to have her home.  I am so glad she didn't give up and found her way home.

There's still one more 'hero' episode about our sweet Daphne - but I'll save that for when I tell about her younger sister Minerva, as she was the one saved.  As I said, Daphne shows great loyalty and perseverance, and doesn't give up on her family.  She definitely is a treasure.