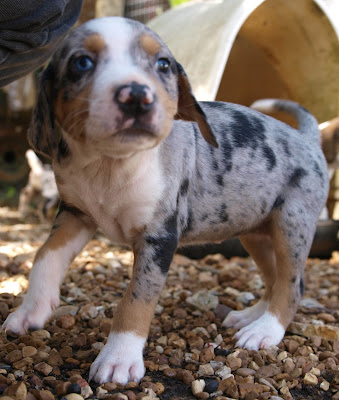 Meet Sweetie : Our Catahoula Leopard Dogs
I found this cute picture of Sweetie as a baby when I was looking for when they were born :)

Sweetie is one of our set of 'twin' Catahoula leopard dogs, from the line we bred for four generations.  Sweetie and Spud were born in the early Spring of 2013, so they are now coming on four years old.
Catahoulas are pack animals, herding dogs meant for controlling cattle and pigs in the swampy woods of Louisiana.  You might find them listed in some places as 'Louisiana Leopard Dog', or 'Catahoula Cur.'  And they are a registered working class breed with the American Kennel Club.
Having just one Catahoula you would miss out.  They build on each other and cooperate in a way I have seen from no other dog breed.    They are protective especially of other animals and children, and ours are only aggressive when they believe there is really a threat.  It saddens me to see their aggression listed on the higher end of breeds... perhaps due more to their crowding of people and pushing them.

Perhaps, being 'pushy' scares some people?  Ours are very 'pushy.'  Our newly moved-in neighbor once complained because four of our dogs surrounded their out-of-state relative and 'herded' them all the way back to their property line, then took off for home!

In our experience each new member of the pack is trained by the elders and finds their 'niche' to living with their people.  If not given one, they will find their own "job"and take their self-assigned tasks seriously.  It would be hard to keep one in an apartment, especially alone.  They are exuberant, and need lots of space, exercise and time with their people.
This was Sweetie, as a baby.  She has one blue eye, and one brown.  Besides looking the most like her brother, she was also the smallest in the litter of ten puppies.  She had a very sweet and 'dainty' nature, right from the start.  She was 'the sweet one'.  I couldn't think of any better name for her.  It just stuck.
.Puppies and the goat.  We used to let the goat run free with all the  dogs, but we had to put her on a long kennel run.  There was an incident where Daphne and Loula had to bring her back from the swamp, where she had been mired for hours with mud up to her armpits.  I was so proud of my girls that day, as we had no idea where she was and were growing worried as darkness fell.  They were gone so long with her - we knew they were staying by her side.  To this day, the goat has a cord she can travel along the entire length of our driveway as well as a small pen she spends the rest of her time in.  And, she still thinks she is a dog, laying on the porch with the other dogs and running back and forth with them.  The dogs know, but they don't tell her the truth.

Sweetie and Spud as babies, at about six weeks of age.  (see above and below)  Sweetie was a bit more cautious.  But together, they were brave enough to meet the goat.  Being herding dogs, it is important they grow up with livestock from a young age.  Spud (the brother)  actually got close enough to lick the goat's nose.
Sweetie and her brother, Spud, sharing secrets.
All grown up, she is still the dainty one.  One of the very 'Sweetie' things is to see her sitting somewhere, front paws crossed at the ankles, and surveying the other dogs with an air of dignified amusement.  She believes she is 'in charge'  and keeps our other dogs in line.  She is the first to groom an ear, chide a barking puppy (her young nieces who are one year old, our last generation, which included the dog our daughter is training), or raise the alarm that someone or something NEW has arrived and must be barked at.

She had decided, early on, that she was MY dog - or I was her human... either way.  She greets me on my way in from work.  She expects (with head on my knee and eyes closed) to be fed a morsel from my plate at the end of family meals.  She gets jealous of the other dogs if they think they can get in line before her for a pet or a treat.  She sleeps closest my bed curled up on my bedside rug or a small cushion in the corner of the bedroom.

She thinks she knows what is best for me, and tries to keep me to a schedule.  Often, she pokes her cold nose under my elbow if I am sleeping in late.  Late at night when I haven't come to bed yet, and am up typing at the computer, she comes and bunts her long pointed nose under my knees to see how I am.  If I don't pay attention sometimes, she tries to get herself under my knees and roll my chair to make sure I know she means business.
Sweetie on 'alert'.  On an excursion out to our west field, she was keeping her eye on her younger sister and our daughter at the same time.

Sweetie really doesn't like the leash.  She will walk on one, but only with her head hung low.  Her brother is the 'town' dog who likes other people and being on display.  Of the nieces, we have the same thing going on - one loves to follow people and do what they do, and the other would rather stay back and rule the pack and wait for the people to settle down to the homefires. Sweetie is okay with other people, especially children, but she is going to sit right by her people and keep an eye on everything for a while, just to make sure.  She takes after her great-grandmother in that.

Both sides of the Catahoula nature are interesting to see repeated through the generations.  At times, we say the pairs we have kept are two halves of each other's brain - one outgoing and people-focused, and the other seemingly introverted, but actually the brains behind the entire operation.
Although all of our dogs are now altered and there will be no more puppies we cherish each of the ones we have gotten to meet like they are family. And our daughter has a Catahoula to raise now that is well-matched to her. That was important to us.

I'll try to introduce you to Spud, Minerva, Daphne (and her sister Loula, who was killed by a car), Lucy and Freckles as the time goes on.  Their great-grandmother was Misha, who we recently lost at the ripe age of seventeen.  They represent the last twelve years of our lives here in Tennessee, in a way.  They all have their own distinct personalities and stories.
Posted by RheLynn at 12:36 PM