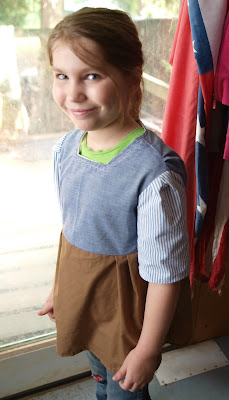 This is the 'handmade' contribution to her school clothes.  It is to be worn over pants.
I think it would be better with a white shirt underneath :)

I went to sewing yesterday and found that my skills needed refreshing.  The first jumper (not shown) had several errors in it and I ended up making it a buttonback for wearing at home.  Esme pointed out something she liked online and I tried to see what was in my box that was near that coloring without having the white top that it did.  This isn't all that close, but it ha the flavor - something slightly formal and timeless.  It has a zipper back and is slightly loose around the middle, which is good - because she is growing. 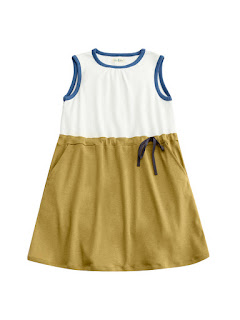 This was the dress she liked online.

We went to the store early today and bought school clothes and filled her supply list.  She chose a long animal print dress with an orange skirt that I wouldn't have thought of originally - but it looked good on her and she was really happy with it.  She even found a headband to match it.  Then we added a few more tshirts, two pairs of leggings and two pairs of dark jeans and all the new underthings she was going to be needing.  I didn't spend a LOT, but it was a good chunk.  She has a blue peasant style shirt coming site to store too, that I caught online.  And she has about six or seven things I bought over the summer that are already hanging up and ready.

So - we're getting ready to go!
New clothes.  Lunchbox tests.  Getting to bed on time and getting up early.
Now if the bus stop would tell me when her pickup time is!
Next Thursday we're 'in the car and on the road'... as Esme called getting ready for school earlier this year 'getting in the car'.