I was on the edge of a headache all day, since I woke up... kind of have half of it gone now.
Because of that, we took it 'slow' today.. and Mark did some PE with Esme to fill in some of the time. 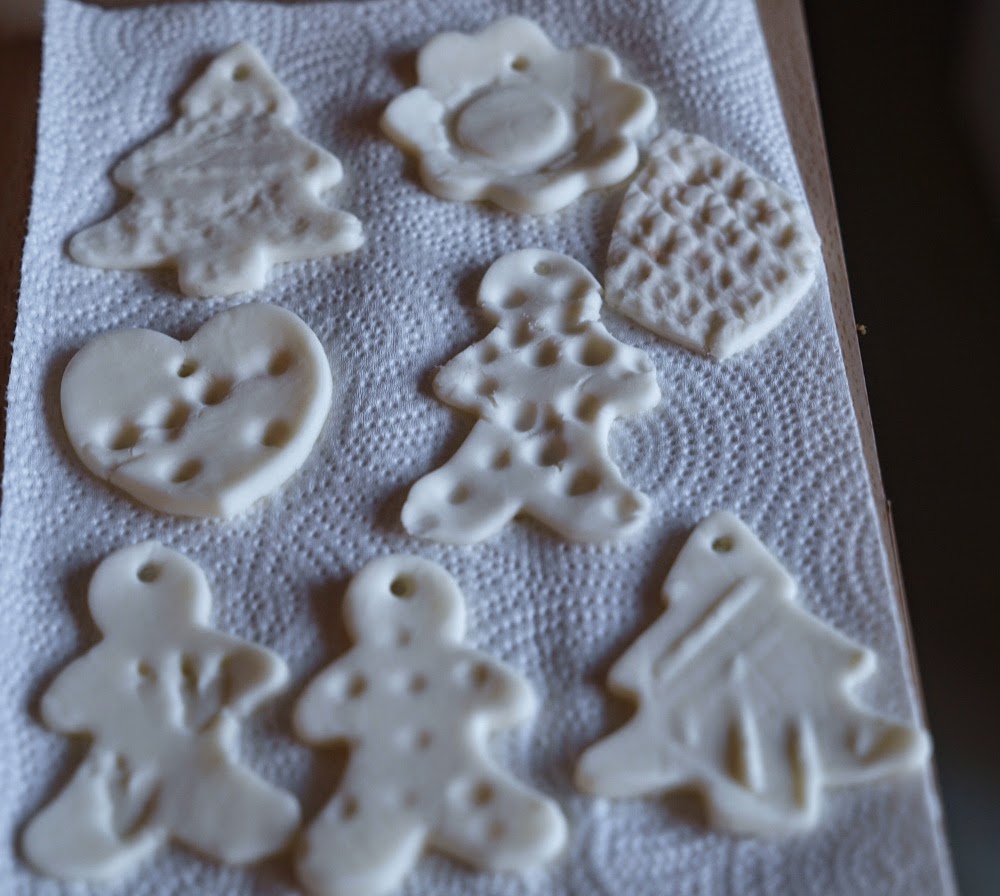 Christmas ornaments
made from air dry clay (cornstarch and white glue clay recipes)
1.5 cup cornstarch
1 cup white glue
1 tbsp baby oil
1 tbsp white vinegar (smells awful)
The recipe said the vinegar would make it last longer..
After mixing this awful glop together I put it in a
microwave safe bowl and heated it up for about 45 seconds.. then
put it in wax paper and rolled it out with a rolling pin.

We found texture things in her toybox and made impressions on the clay
after rolling it out inside wax paper. 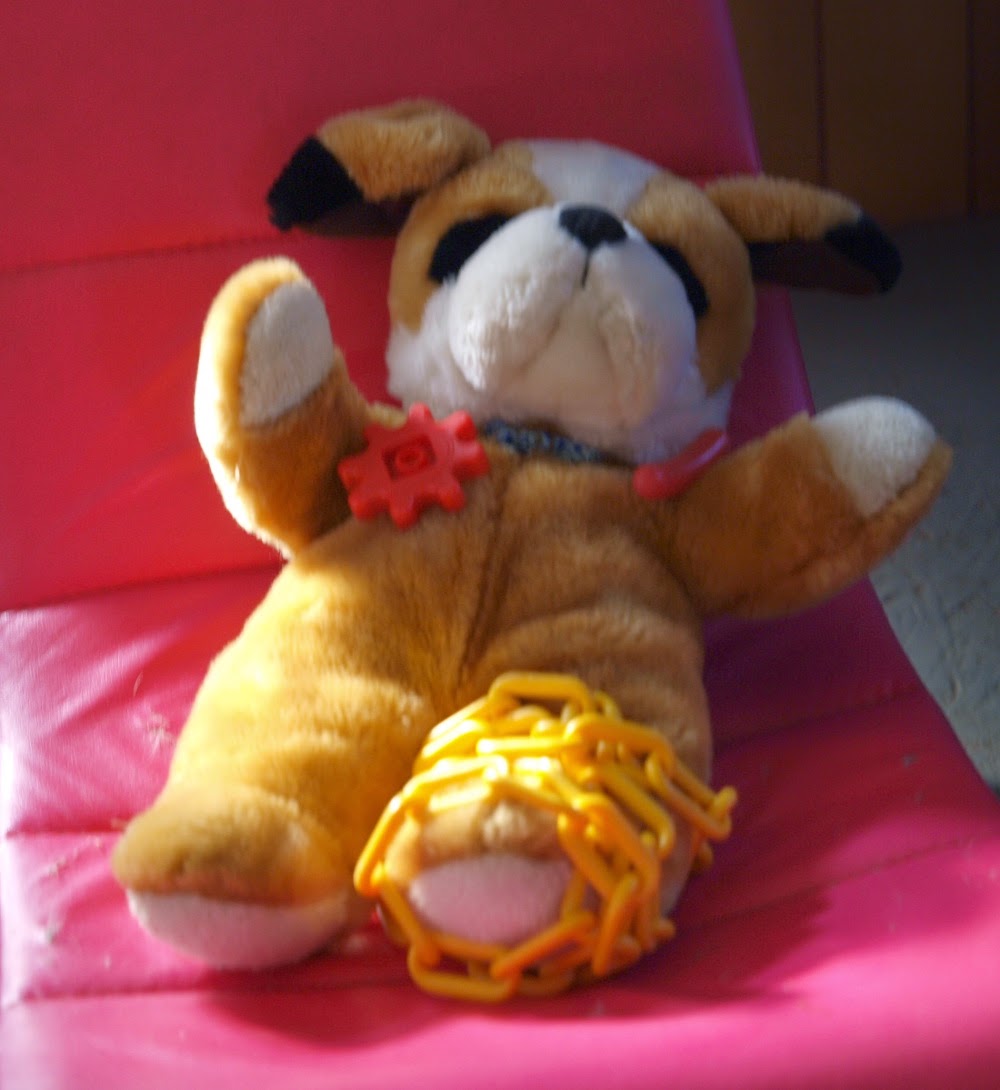 Morning pretend:
Her 'child' she was taking care of that had a broken ankle
and needed a toy and a food while they healed.
She was not being a doctor, - because she had given it a bath and brushed its hair before that. 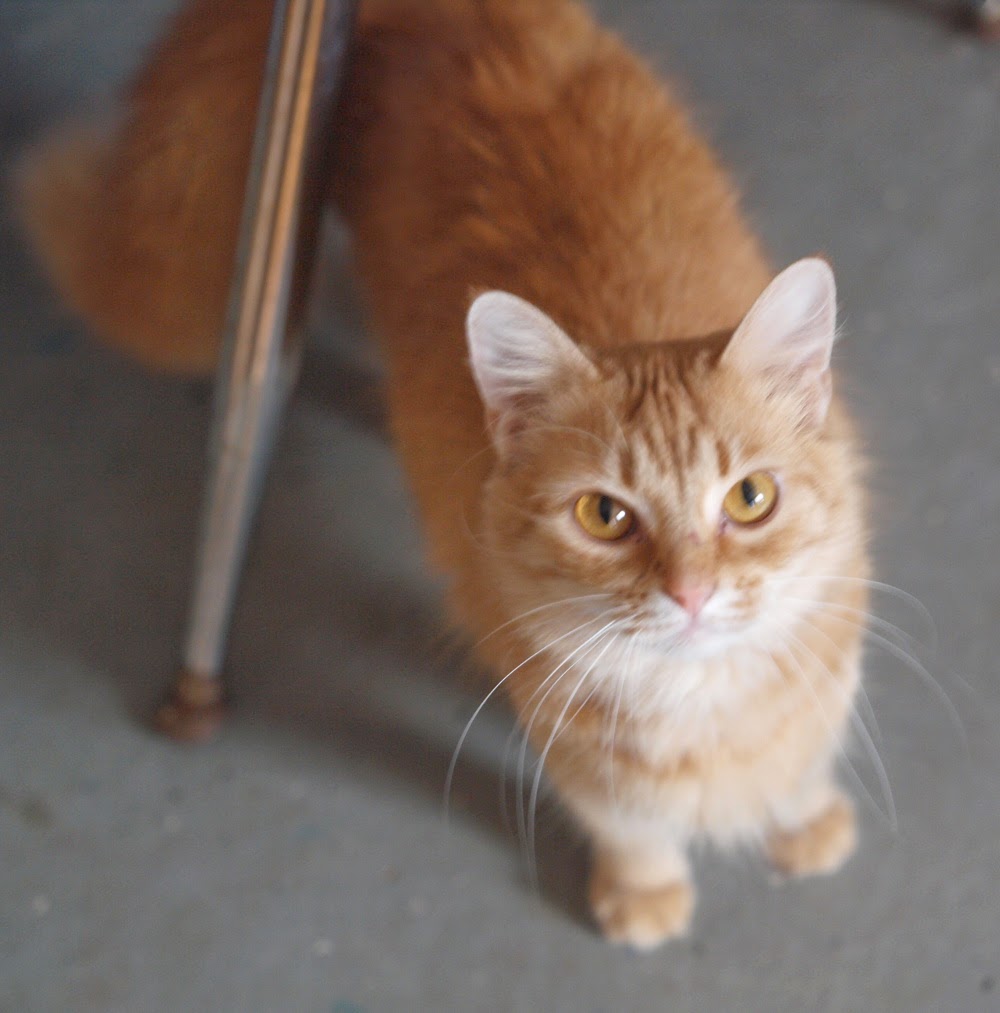 Her picture of her Pumpkin cat 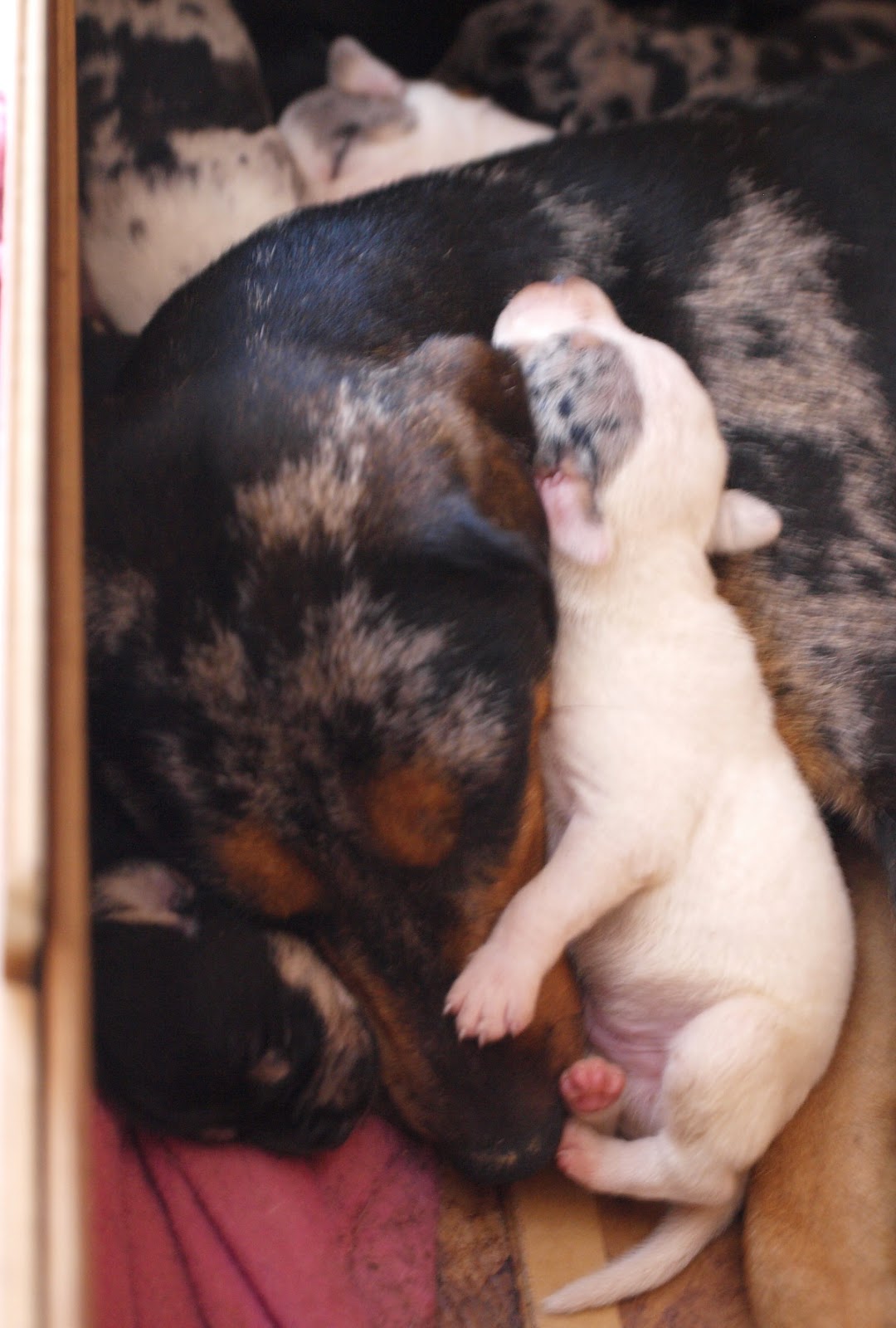 Minerva and her babies, catahoula puppies.  She is really enjoying her little ones. 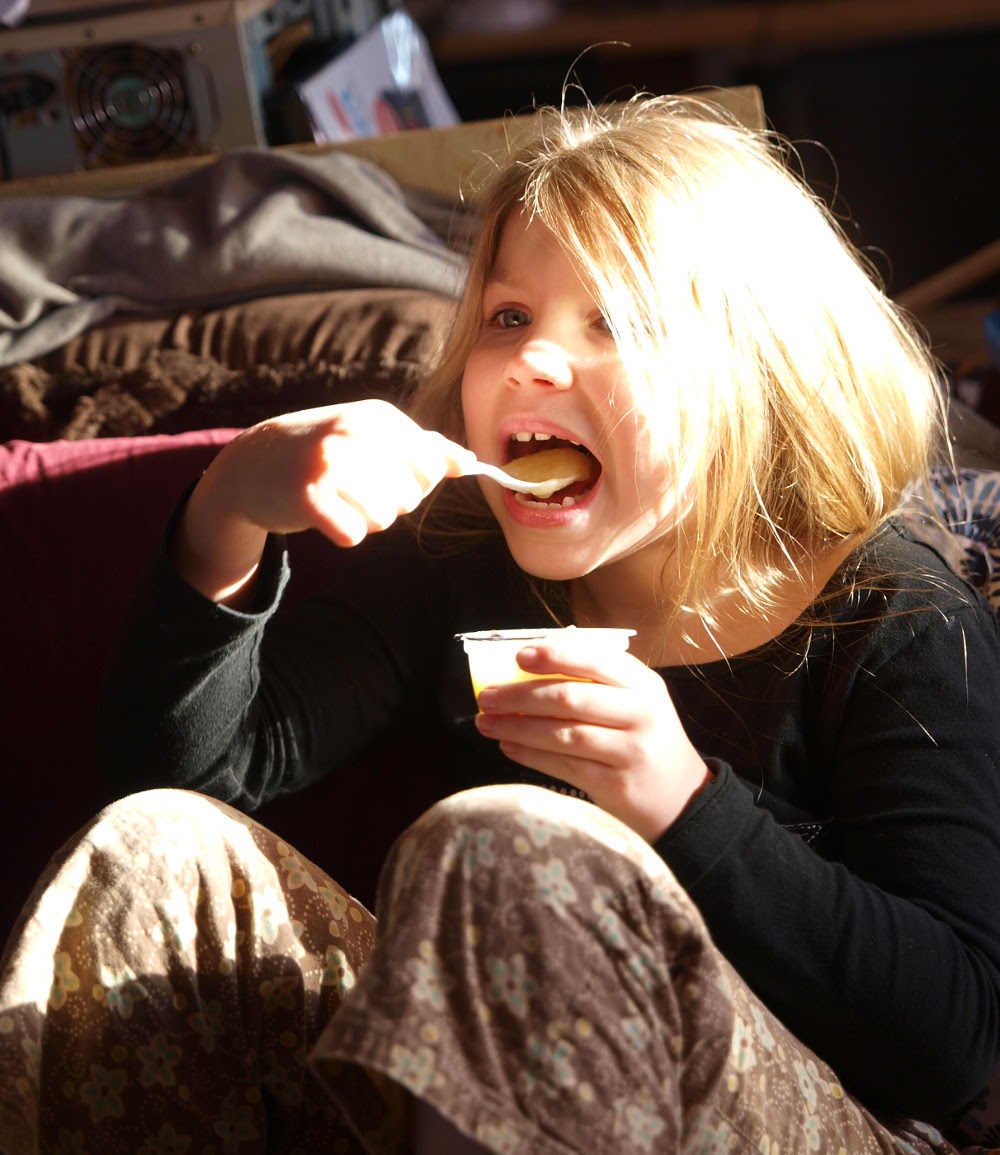 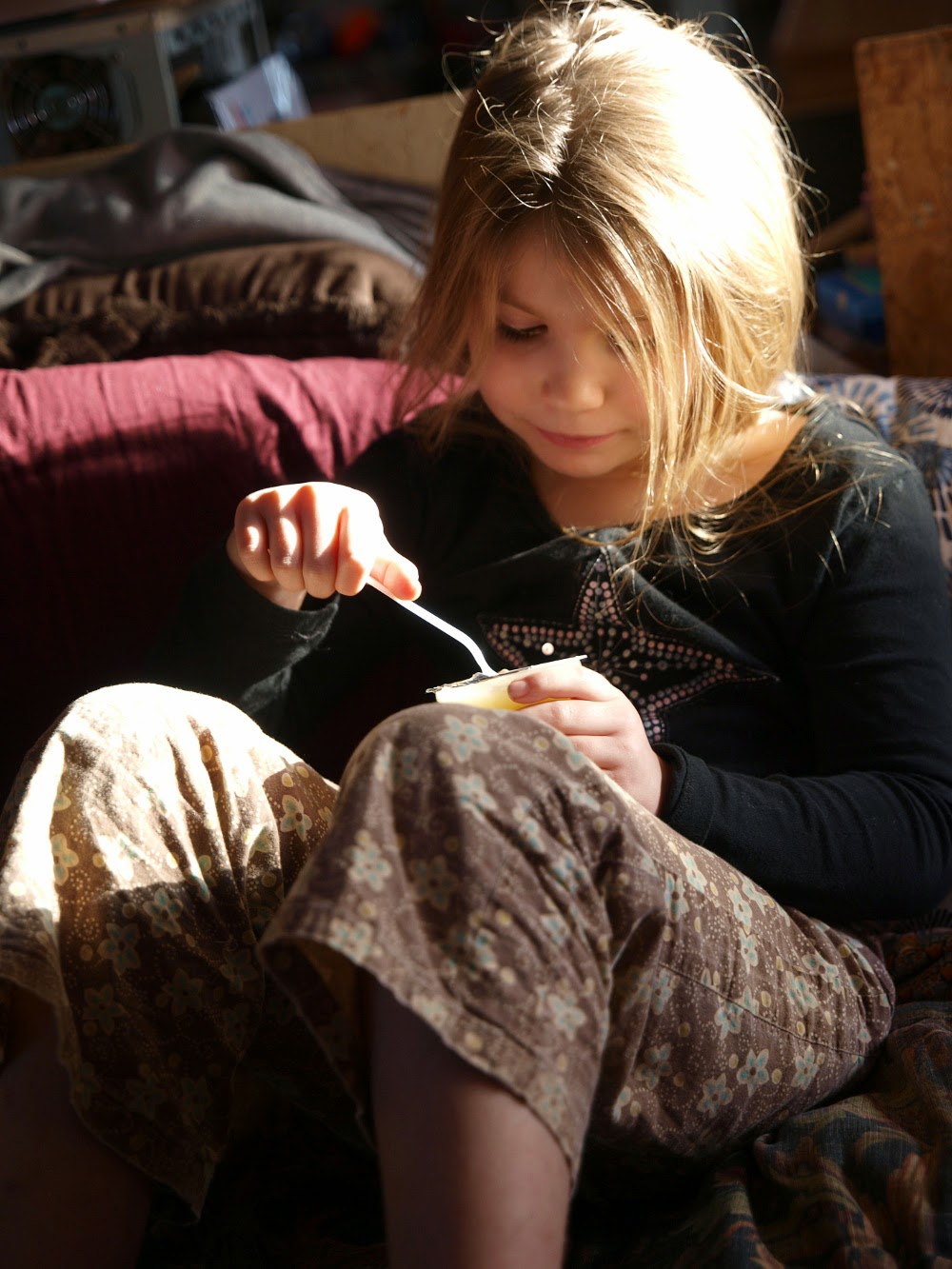 Eating applesauce in the sunshine

2.15p    - Liberty Kids (ep 8, 9) her request
3p    - Fixing dryer,  Maytag 1970s model - she watched us and asked questions.
It had been deciding when to heat and when not to, when to make the timer work, and when not to...
We had taken a peek and it had lint build up in it that was probably interfering with the wiring and needed
tending to either way...
Esme examined the dryer with 'panels taken off' .. looked at the wiring and how Mom and Dad were vacuuming out the lint etc..  She helped me get some paper and pen and write down the part number off the timer in case we need it later.

We went to town for some extra parts for the dryer.  We (Mom and Dad) replaced the vent hose and clamp before putting it all in place and testing it out again.  It works.  Mark says this was why the Maytag repairman was so bored all the time.  We only needed a single multihead screwdriver (hex and phillips) to open the dryer, do all the work and put it back together.

About a year ago I remember calling the parts line about the water inlet valve on the twin washing machine - and the lady asked me where that number was coming from.. was I looking it up somewhere?  No, I am reading it off the part.  Silence.  Do you mean your washing machine has that actual original PART in it?  Do you know how old that is?  Yes, it's from about 1979.  OK.. and you need that part?  We'd like to get one.  I have to go find a book, that is so old it's not in the computer...  The part would have been six dollars.  But by that time Mark said he had rinsed the old one out and it 'worked ok again'.. and we put it back on.

I ended out the night recovering some throw pillows on our bed.. while Esme drug up a dollhouse out of her room into the second story of the house where my sewing area is and started having a party with her little figurines until it was time for bed.
Posted by RheLynn at 5:12 PM