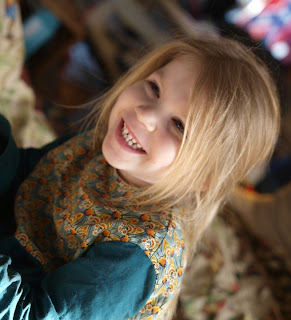 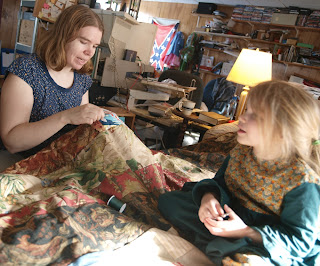 She was saying: 'baby hands have to help you...'
not as much as baby hands think they have to... 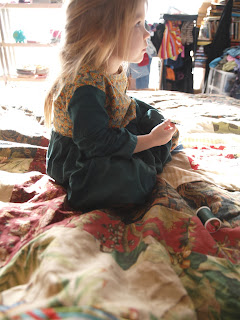 holding scissors waiting for me to ask for her to cut thread...
didn't last very long, she couldn't wait and got fidgety, so she went to playing puzzles

Things are slowly plugging along, vacation ends on Sunday. It is a little warmer outside, in the 40s and the sun is shining. Both of those are nice. If we could get rid of the tiny lingering cough we have left (Mark's is worse than mine)... we would be good. Esme really wants Mama to get back to wanting to play, or 'be busy' all over the house. Every five minutes she wants us to 'be busy.' She knows her Mama... She gave a good rendition of 'how to make a dress' to Grandma yesterday, which included squiggling a finger on 'fabric', picking up pieces and tossing them to the side, then running the fabric along a surface while giving an impression of a jackhammer, then the dress is 'done' and can be held up under your chin. That was cute.

homeschool?: Not sure if this counts, but she has been interested in certain things. All of her balls, marbles and playdoughs have become 'Earths' and they go flying around in the air. So, I am trying to tell her more about Earth, Sun and Moon, as well - as she has taken an interest in 'earths' and 'planets'. I've had some success in showing her the 'setup' of the three and what they do, and what they 'are'... but it will have to develop over time. I showed her a picture of the Earth as seen from the Moon - and told her the Moon was tiny so the Earth looked BIG from there. She thought the idea of people standing on the earth with a camera was amazing. I described that the Earth had water, land and clouds - blue, green and white.. but the moon only had white and grey sand and no plants or animals. She says it is 'our moon' and 'like my Earth and like my Sun.' I also told her that if the sun was not on part of the Earth and people made lights like in a city (like LOTS, thousands, of little flashlights all on and pointed up at the sky) and we took a picture from the moon we would see all those little lights here and there where the green land was. She really thought that was cool - and said 'Mama, I love you.' and squeezed into my arm and thought hard about that one. I've been looking at solar system books and kits but have not found anything appropriate for her dexterity and level of roughness that still had some scientific accuracy to it.

I did some cleaning, need to do more. I want to play with my seed collection but I don't want to be in the cold downstairs more than I have to be. Need to see to the laundry as well again. Esme is wearing her 'green size 5' dress and matching pants, today and it is a good working outfit for her. She has been painting a lot making 'heads and bodies and arms and legs' people and fishies. She spilled her paint cup once on the floor and went to go hide in the corner... but we cleaned it up and I know most kids her age would have spilled it ten times over now in the past week. We do need to get her more watercolors for Christmas. She has went through both of the pans we bought her for her birthday in the course of a little over a month. I think I have vetoed markers as she will not keep their caps on and I've thrown away another box she hid in the pool table without their caps on.

The puppies had learned to climb the stairs and we want to 'contain' their mess to the basement, plus they are LOUD and keep us awake otherwise. Mark had put a board in front of bottom of the stairwell to keep them contained to the epoxied floor down there, which is much more scrubbable than the stairs or upstairs floor. Esme went down there this morning before I got up and moved her chairstool to the edge of the board so she could step from the steps to the chairstool and down and up without having to climb the board or ask for help. She did that by herself, carrying the stool from the kitchen and leaving it there until we removed the board in the morning. I was pretty impressed by her forethought there - after climbing the board once and knowing she needed a better solution!

The other night I asked her to go to bed and she growled at me and stomped her feet. Usually, all I have to do is tell her what we are doing tomorrow and that we need to sleep until the sun comes back. She wasn't having any of that, because she was 'being busies downstairs' and didn't want to go to bed. I told her she had to stop that if she wanted to be a 'good girl' and have the privileges good girls have, (crafts, read books to her, go to town, go to Grandmas, even Christmas presents). It wasn't a long conversation, and I didn't think it sunk in. But, she went to bed after three books. The next night she went to bed easily and after we read one book she hugged her rabbit and gave me 'hug and kiss' and blow kiss after me as I walked away. Then she called after me 'see Mama, I no growl, I'm a good girl. I stopped that.' Well, at least it is sinking in, somehow... Her memory is astounding, although she only shows it once in a while now.

I also need to do more quilting on the queen size quilt, so I can wash it properly. I am loathe to not have it's warmth on the bed but Mark is right that the dust it had collected in two years might be prolonging our cough problems. He bought an electric blanket the other day for part of his birthday (yesterday, he said it was a great one and he bought donuts and meat on his trip out) so the warmth isn't as important as it had been.

note : Esme's circus animals came in the mail today, the ones she thought were coming the other day. I did not let her see in the box, but I opened it and said 'is this.. yes, this is from Santa!' OK, gotta wrap it up for Christmas, he told me to wrap it up and make sure it said 'ESME' on it. I expected her to throw a fit... but she didn't entirely. She was very happy until I had finished wrapping it up. THEN she wanted to play with her 'new cube'. ?? I told her it was for Christmas Day coming up when everyone would get presents to open up at the same time. Then she was okay, until I told her it was going to be hidden somewhere she couldn't see it until then. OH NO, then she is mad. She wants to hide it herself. *roll eyes* I gave her a nickel and told her to go feed her piggy bank. It was gone when she came back... and she was just slightly upset at me. What a time we are going to have in years to come with this child! And, yes, I know - I'd never get away with that with an older child, at .. all....

also, the leftover wrapping paper is her 'map to Christmas'... she has it on her desk now and 'reads' it to tell her how to get there. *roll eyes again*

development note: She can put on her socks now, as well as her shoes (got that one early but had trouble coordinating putting the foot into the sock while pulling with hands). She can use scissors to cut some things, but still cannot cut out a shape.... mostly this is my fault because I don't give her the opportunity often. She is wanting to spend more time 'doing her own thing' as well... Mark and I discussed tonight transforming the 'school room' into more of a kid play room for her. If only it wasn't so cold there.. maybe a rug would help.