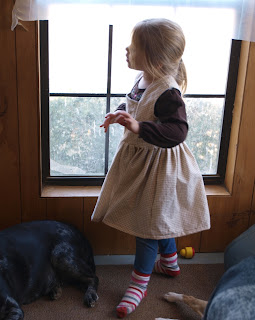 The shirt came from her aunt Gail the Christmas before this one - and it is one of the few items I can stretch the neck on wide enough to get Esme to cooperate with it. I'll try to make her some of the blouses out of this pattern or another later - because she will outgrow it. 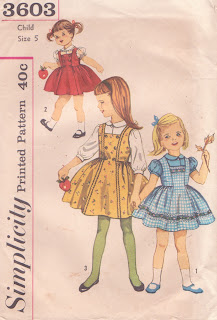 The only pattern I could find quickly was Simplicity 3603 in size 5 (pictured). I am at the point where I believe Simplicity patterns are sized just a tad bit bigger than McCalls... the 8001 size 5 was a very good fit, this is a bit big even witha shirt underneath it. The split square necked front was a bit of a challenge, as well as the skirt was actually VERY full... I tend to pleat instead of gather, just because. I'd never get anything done if I had to fuss with gathers instead of neat pleats. Esme doesn't seem to mind, so I keep on. 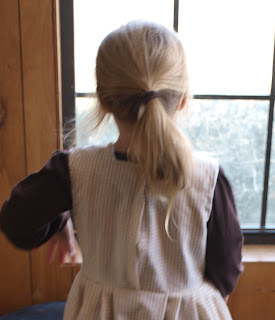 The back opening also overlaps a little on a reinforced buttonband...
buttonholes to come next, as I usually do those by hand. Esme requested pink buttons. I'll probably put a few down the front, as well? And the brown rick rack would look really nice if I could get my hands on some. The white rick rack... I'm not sure what the point would be? 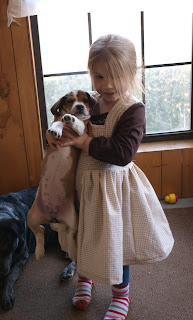 Loula and Esme are like two peas in a pod now 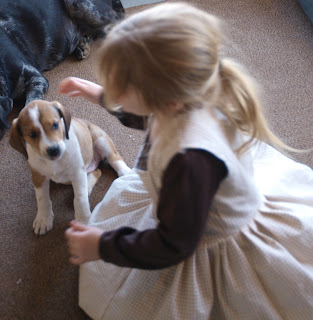 Esme actually has the puppy thinking: 'Will you slow down?'
Mama and Daddy feel that way most days, too!