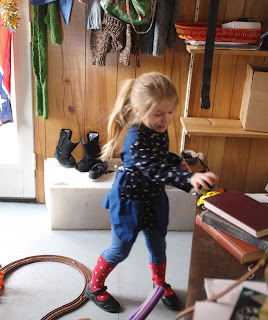 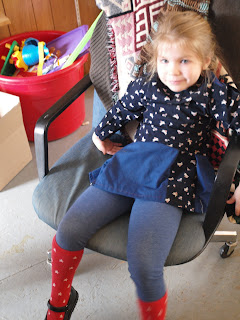 I made this a few days ago, mentioned it but did not get a chance to take any pictures. She wore it to town today. It is a McCalls 8001 alteration - with the two pleats in the front instead of one, and a dropped skirt front as well. It is the last bit of the blue dobby rabbit fabric from Japan bought several years ago. It was previously featured as two pairs of pants, so it has done well for two yards!

She put her socks and shoes on herself. We had to take a package to the 'mailman' for Grandma, and Esme enjoyed the idea of helping with that, even though she was more interested in reading her bike book when we got there. The train set pictured is a clearance item Daddy found for her and she nearly lost quite a bit of hair to it yesterday - we had to work it out! She still did lose a little hair, but it is very hard to tell, as Daddy did a good job rescuing what he could from the track mechanism before finally cutting a small lock off with it. Hopefully she will be more careful with it now.

Today I am inspired by the Betsy McCall paper doll archives I found on the internet. I can't believe I hadn't seen them in all this time! Several of the dresses shown for the paper dolls have the corresponding McCalls pattern number the dress can be made from. 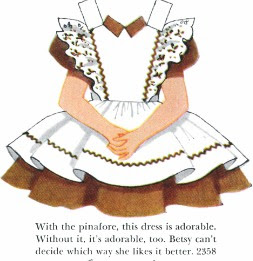 I saw one brown dress with a white pinafore (January 1960) that I really liked. I want to replicate the look but with a brown and white gingham check pinafore. I bought some fabric but could not find any brown rick rack at the store - they had a place for it, but something else was there. :( I'll poke around and see what is in my collection, maybe I have some hiding - I know there is red and blue... I'd like the pinafore to go over a blue dress or a brown dress. Esme has been painting a lot lately and both of her new short sleeved dresses have bodice and skirt frontispieces FULL of paint splatters.... that don't wash out! Well, that is the good thing of being a seamstress... clothes are not irreplaceable, it just takes a little time set aside to make or remake them. And paint splatters do not make them unwearable... just maybe not the best attire for town trips et al. 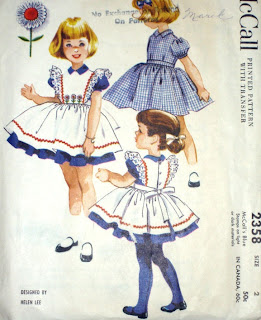 McCalls 2358 girls dress and pinafore sewing pattern
I've passed up the chance to buy this one a couple of times... I wouldn't again!
It looks so different in the plain brown above with the white pinafore

I also know I have another pattern (or two) that are similar enough to work with... going to go sort through them now and find one about a size 5. Side note: Mark got me some peppermint coffee which is VERY good. :) I really love peppermint coffee and am sad it is only available during the 'holiday' season. 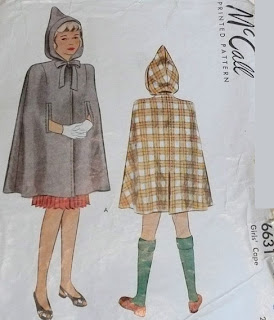 I've ordered a copy of this pattern to come in the mail. I don't see Esme wearing the armholes like that - but I could be wrong. And, it doesn't mean I can't alter it into something she would wear. I am very interested in the assemblage of the hood - and the general idea itself. I might be able to expand it larger to make one for myself... which I probably would wear as pictured.

Sweet rabbit dress. Love the cape pattern. We used to have red capes when we were 3 little girls together, my mom made them and we always used to get lots of compliments.

We have one of those pairs of pants!