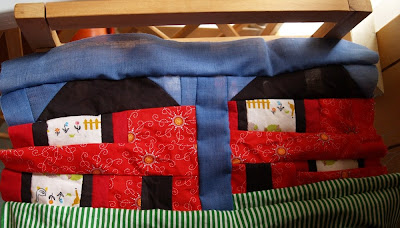 red fabric is 'Bravest Dragon' from Avlyn
I saw a quilt top on a website with lots of different geometric houses in it. Mark thought it was really cool, too - and I tried to draw out something similar that I could make without a pattern. This is kind of a crooked attempt - but considering the amount of help I was getting from a toddler in everything from keeping the scissors out of reach to pulling and drawing on fabric and sitting on my chair in front of the sewing machine (effectively blocking the pedals) it was a valiant effort.

It might look better with a border and other bits sewn around it. At any rate it is the start for making a better pattern that could be done straighter.

We went to the library in Paris today and Esme had a lot of fun on a computer program there. It had little animals in 'jack-in-the-boxes' that opened up when you moused over a button on the screen. If all three jack in the boxes had the same animal showing they counted off 1,2,3 and sang a song. It was really cute and she hated to have to go. We then got her some french fries and a small shake on the way to the grocery store.

Now Esme is asleep for a bit, while I cruise internet sites looking at fabric and ideas. I like this apple fabric from karaku's Japanese store but it is only a half yard. I'm thinking about some printed fabric in dark bottle green to make trees for the house quilt -- but maybe the green gingham and green stripes I have will be enough.

The red 'dragon' fabric was from the little store Mockingbird Threadworks that I had found. Someone who used to work with me said it has been there for years -- but I'm pretty sure it wasn't there when the art/coffee shop opened up next door to it. I would have seen it then! Anyway, started Esme a sundress out of the alphabet fabric instead of placemats. Haven't finished it yet.

Several times I looked at Esme today and just can't believe she is this big, and capable of so many things. It was not long ago at all that she was just a tiny baby, and before that - not even thought of! And then I get all warm and fuzzy feeling and start smiling giddily at both her and Mark - such a wonderful family.
Posted by RheLynn at 3:28 PM