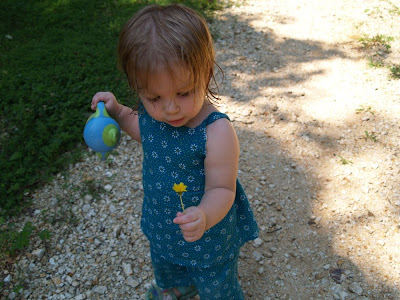 Esme loves picking flowers outside
Today she brought one inside to show Daddy - and I then dug one out of her toy area to show me she had been collecting them for several days in a row. 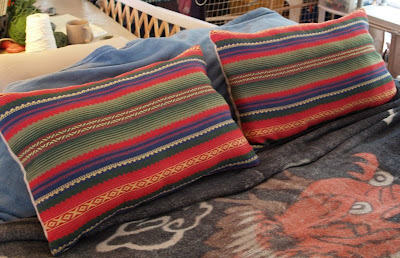 There was a design magazine in the break room at work, and I felt compelled to throw a little color around in a crafty way. These fabrics were picked up at the flea market long ago and became two simple pillows for the bed. They're pretty comfy, too! 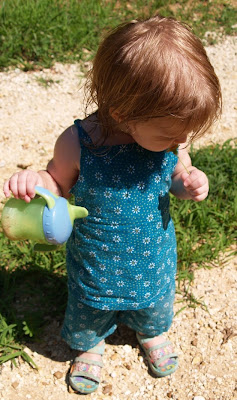 She loves to smell the flowers and tell us they smell 'mmm' her idea of 'good to eat.'

I wrote 'E S M E' on the bathtub with soap crayons this morning and asked Esme what it was - she said 'E', 'ssssss', 'mmmmmmm', 'E' She didn't say 'Esme' but she has finally gotten the 'S' sound down, which is a new one I haven't heard her repeat before. She is also talking quite a bit more clearly - telling me she was 'ready' to be up this morning and needed a 'change.' She says these often but I usually have to guess that is what she said. This morning it sounded like the actual words.

We're working more with a 'big girl cup' - but she still sticks her tongue in it and tries to lap the liquid out. *sigh*
Posted by RheLynn at 9:55 AM

Our attempts at the big girl cup have been hilarious disasters.

she's getting so big!