This is Mark's collection of Astounding science fiction magazines, later known as the SF magazine Analog, which is still in publication today. He has magazines from as early as 1939 in this collection, many of them full years, right up until the 1990s. We moved and reorganized these magazines during the last week - putting some duplicates and oddballs up on Ebay at our store.

The Analog magazine published early stories and serials by well-known SF authors such as Theodore Sturgeon, Philip K. Dick, Harry Harrison, Isaac Asimov, Robert Heinlein, Larry Niven, Robert Silverberg, Poul Anderson - and many more. There were also countless authors that never made it to the level of 'household names' as some of those just mentioned - but are also part of the history of early science fiction. I liked Mark's quote that these short stories are similar to a 'short course in the golden age of Science Fiction.' The magazine also did (and still does) publish fact science and technology articles.

More on the Astounding/Analog magazine publication from Wikipedia. 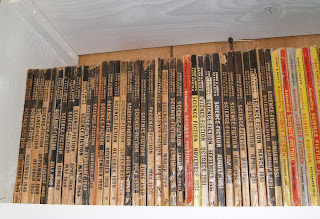 Close-up - they aren't in perfect condition but each copy is readable. 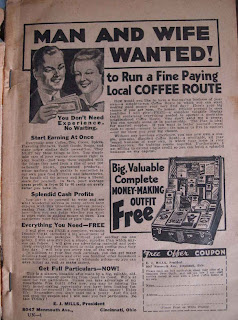 An old ad inside the cover of one that caught my interest. The year was 1939.

I am so jealous,LOL. My brothers gave me a collection of about a 100 of those when I was in grade school(back in the 60s), as well as all their old baseball cards. I collected them too until I came home one day and my dear mom had sent them to the dump. There were over 500 baseball cards that she threw away as well! And yes, I actually read the magazines-still do when I can find them.

Wow! That is quite a collection.

I love looking at old ads. Such a different time. That's a great collection.