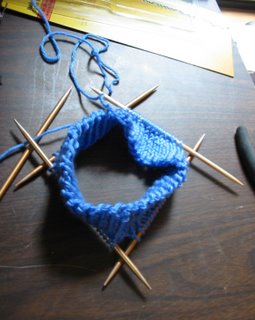 The start of a hat
on my desk at work 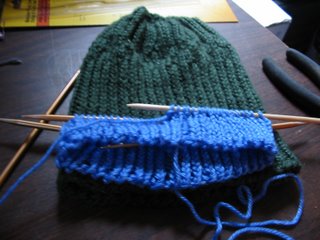 Compared to last year's hat - which got a lot of wear and washings!
Started on the first of the hats for Rabbitch's Hats for Vancouver's homeless drive, using the same pattern as the Green ribbed hat from last year, only longer. I might get a bit more creative after this one is done.

I finished the gloves and upon finding they fit 'Miss.I' here at work, gifted them to her. She really does need a pair of working gloves to feed her chickens this winter (the boss says).

Gifting the gloves will also make me more likely to make a second pair quickly. Weird, but that is how it works with me. The more I have of something laying around, even if they are 'in use' - the less likely I am to make another one. Anyone else have that? 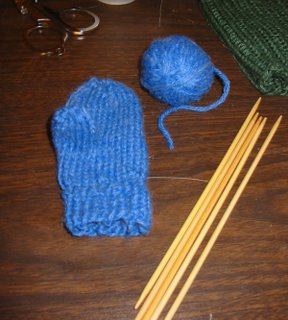 Great pattern - easy to follow, not much yarn required. I know there is a children's charity here in TN that could use these.

Sally and I have a Scary MomentYesterday morning Sally and I had a scare - but she was okay. She had thought sleeping right between my shins on her back was OK at night - and it usually is. But when I go to sleep after midnight and the alarm clock (across the room) rings at 6:30 am - it wasn't OK. I awoke with an unaccustomed 'snap and jerk' response. I must have somehow caught her in the ribs - as she flopped around like a fish for about 5 seconds, opening and closing her mouth as if to meow - but nothing came out.

I was REALLY scared - and Willow came running, even though Sally had not made a sound (that I could hear). Willow sniffed her all over, I rubbed her up and down her sides (she was breathing - just stunned). Less than a minute later she was running around and playing with her mouse.

I have sets of cues for the girls, our 'language' that is always the same. I told her what I usually do when she gets hurt or scared 'Everything's alright, I need to be more careful with you, don't I?' and 'You're my little girl - I would never hurt you on purpose.' She climbed into my lap purring and I loved her up. But, man, was I freaked out thinking I had hurt her. :o(

By the time we left for work she was entirely normal - chasing Willow and her toys. When we got home, she was as loud, vocal and loving as always, bringing me her mouse and asking for laptime. I think I need to move the alarm clock over beside the bed again, so it can't happen again.

Saw this at Laura's blog.

I used my 'overly common' name. When I put in my full legal name, it said there were 0 (zero) of me! Yikes, no accuracy there, huh?

Ooh, that is freaky. Glad she's fine. My cats sleep in odd places too.

So glad that Miss Sally is okay! Sounds like you did just knock the wind out of her. They have a habit of getting into places where we are not always aware that they are!

Love the hat and the gloves! I am making progress on my knitted kitty, though I am still afraid of it!

Poor you! You had quite a fright. I'm glad to hear Sally is ok now - I think they know that you are lovely and when it is an accident.

I am so glad Sally is okay. Kittys are so easy to hurt, It always scares me.

What a few scary moments! Glad to hear she's okay!!