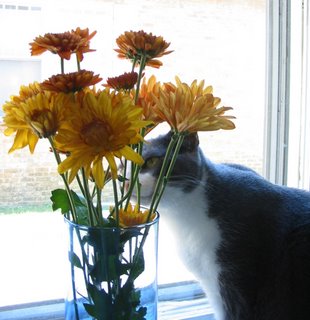 Chrysanthemums for Mr.J, he loves them.
Sally approves too.

You've just got to see what Johanna has been making! Amazing!
How I LOVE the herringbone OWL!

There is an antique mall auctioning off their entire contents about a block from our house. Mr.J insisted to go yesterday, for a little while*, and we ended up with a Victorian-style couch/settee for CHEAP. Apparently it was towards the end of the day and there were so few people willing to go up to the third floor they were saying 'What will you give for something in this room?' They are auctioning off the bottom floor today. Our boss has agreed to help me move the couch to their back loading dock, and into his truck.

Mr.J is doing pretty well! He is trying to get his own food and medication now - although he says that is a hard task with me around ;o) The couch is actually a good idea, since this one happens to be long enough for a 6'4" person to lay down on. This way he has something besides the bed to lounge on with his arm propped up.

* He is so tired of being cooped up in the house! He said it was good exercise for him, as long as the pain medication held out.

Sounds like a great find! Can't wait to see it!

Well it sounds like life is getting back to its pace. Good to hear he wanted to go out!
Oh yeah! Yesterday's snow storm was a treat! But tomorrow I will put up some great pictures! We went out with Alex and Amber for a night on the town in their village of Peterborough! had a blast!

Pretty flowers. The couch sounds great!! Hopefully he isn't giving you too much trouble. :)

is J left or right-handed?

i'm SO right-handed...when i broke my right hand i was a right mess!

couldn't hit my mouth with the fork (OW!), could barely brush my teeth, couldn't wipe uh, oh, nevermind that bit...i felt like i was about two years old learning to use my left hand. it was really funny (well, not so much at the time maybe, looking back tho).

so if he's right-handed...eeesh! somehow i'm guessing he's prolly more coordinated than me, tho...ennyway, give him & the girls my best! and you too!
((((big hugs))))