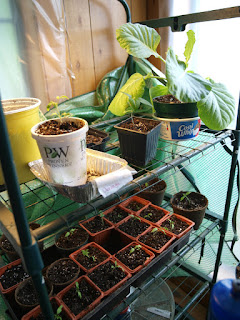 I have moved a CFL light to the greenhouse area to help some of the plants get more light.    I still have some not shown here that are in another windowsill,  but not germinated yet.  The cabbage and several of the tomatoes (also elsewhere) are really needing to go outside.  The Hosta is even a little bigger and/or spread out than when I bought it - it should go out when the ground is not mud, too.  The Hosta is an Aurea Marginata, and it should have purple flowers eventually.  It will be a nice companion to the Frances Miller hosta that is in the garden now (blooms white, has green leaves tinged with chartreuse). 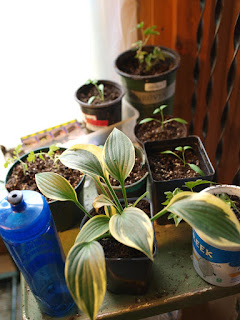 There are three or four jalapeno peppers that are getting second leaves.  The split ivies are doing 'ok'.. I don't see immediate die off on any of them yet.  I can hope.  That Ivy is called 'Asterisk', Hedera helix. 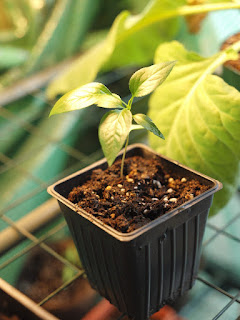 This is the apple sapling, from Esme's homeschool project after we watched the documentary on how plants reproduce and learned that apples from seed are nothing like their parent plants usually.. and we decided to try saving some seeds anyway.  This is the second one we've tried - as the seeds were still in the fridge from the first one and the first one died unexpectedly one day (just leaves fell off and poof, gone?)...  I thought maybe it didn't get enough light, and that the tiny petunia and forget-me-not seeds might benefit, too from a more direct light instead of reaching for the window all day and stretching their stems.  So I'm trying three to four hours a day of this CFL to see if it perks them up more. 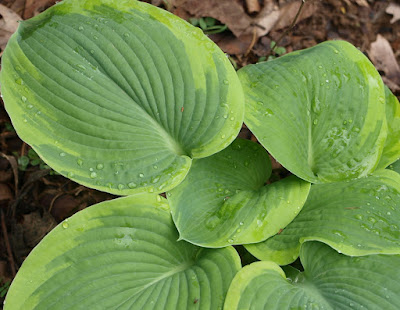 The Frances Williams hosta in the garden is coming up pretty this year.
The hosta seeds have not yet come in the mail, and I haven't gotten my basil planter made yet.

We decided that Callie and Doxie cats are about eighteen months old, probably born in December of 2015.  They are both (hopefully both) getting fixed tomorrow.  Their mother Minion and Pumpkin are next in line, but it might take a while to get them done, as they graced us with more kittens about two months ago.  I'm still a bit embarrassed by Doxie's name now that I remember what it means - but I called her that (and her twin, Dorrie, who died) from the start so it can't be changed now.  Sometimes I call her Dox for short. 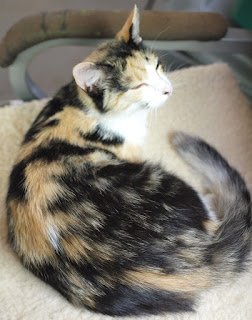 Callie cat, with her one little tiny white spot on her spine

I've set up a hard two days for us.. getting the two youngers in the house tonight and penned up for the night and all the running back and forth to the vet tomorrow.. but hope we can get it done.  Doxie has been spending almost all her time outside so she will be the difficult one.  Callie is curled up in my sewing chair.  The other day I tried to patch a pair of pants for Esme and I had to remove her from said place -- I had to pick up the cushion with the cat (claws dug in) and set it on the floor and wait for a good minute for her to realize I was not moving it back.  Then  she got up and stalked away.  *sheesh*  Calico cats!