It is supposed to rain today - I hope to repot some of the indoor seedlings and start a pot of forget-me-not to go out in the garden later.  My mother had those around our house in Minnesota, so they should be perennial/biennial self-seeding here.  I'm hoping they can go in the hosta garden where it is shadier.

Although we are not doing a big garden this year I'm going to work hard on the two flower gardens to make them better for the years to come - hopefully putting some perennials in each and working the soil.  I also need to cobble together a good trellis for the morning glory, Mark having found a good one for the peas and I'm not sure yet if I won't do those at all this year.

I also bought some nasturtium to put in between the marigold and the radishes.  It is supposed to be good at keeping away certain bugs we would like to die down this year, as well.

Mark used a farm tool he found in a book to get out our deep down embedded fence posts.  He is still sore from that.  I have Wednesday and Thursday off so we can till the garden hopefully one of those days and add some amendments and clover seed to the majority we are going to leave fallow.  I'm still not sure where he wants to put a few tomatoes in - he said it was further down the back of the garden and he'd show me later. 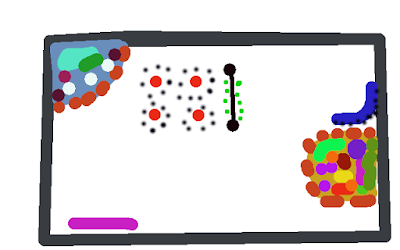 some sketchy plans (with no labels, think of it as modern art, heh)... the flower garden to the right gets lots of sun, while the one in the corner is in the shade.  Mark is thinking to put some tomato cages and maybe the pea fence out in the back middle.  I need to put up a trellis for the morning glory (blue) and fill in some of the gaps in the sun garden with cosmos, okra and other small plants as I go.  The forget-me-not will have to go in behind the hosta in the shade garden where it starts to become forest and vines threaten to overtake.. but if it likes it there it will self-seed for the next few years.
Posted by RheLynn at 4:46 AM