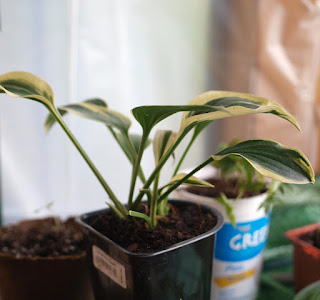 This is a new hosta plant meant for the little garden.  I'm thinking to split it out into pieces and see what happens.  It has several nice stems in the dirt already.  It is an Aureus Marginata, and I really liked the streaks on the leaves. 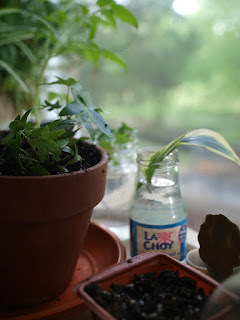 Also, the ivy I rescued a few months ago has been having some issues... the lower leaves keep coming off and I thought I was overwatering it.  However, I got up the courage today to repot it into three smaller pots, breaking the root mass and giving it three chances to live or die.  The soil in the big pot was really dry - not at all what I thought... maybe the terracotta pot has been getting too hot?  Just thought of that - will try to put it in a plastic pot (the two divisions already are).  If the divisions make it - I'll put them in the garden behind the hostas.

I also thought I'd try to root a piece of it and a few pieces that broke off the hosta.  We had some rooting hormone and it is worth a shot.

If they aren't rooted within two weeks of today, they are probably not going to.
Also, my bellflower seed germinated today, but no cleome.  I'll have to replant that.
Posted by RheLynn at 4:22 PM