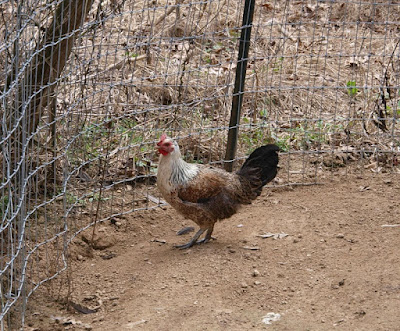 This is one wily chicken.

We spent five days trying to get her back in the coop fence.  She just kept escaping us!  She even laid an egg right next to the fence on the wrong side.  Finally, her want to be with Wicket, the other chicken, did the trick.  We put Wicket up in the chicken house where she could not get out, and then opened the chicken coop fence wide.  In about three hours she was in the fence and wanted to be in the coop with Wicket.  We've put them both up in the house for the night and plan to clip Gennet's wings tomorrow (Wicket got hers clipped the day Gennet flew the coop).  Honestly, Esme told us a week before the escape that she was getting on top of the chicken house and needed clipping.

We got some laundry and grocery shopping done, today.  Mark got some work done on his second bisquare antenna - and got Esme to help him with the construction of it. 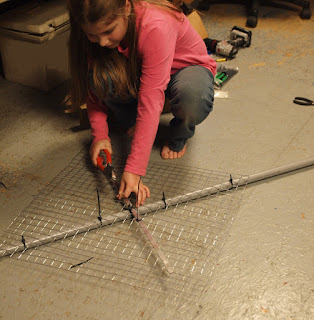 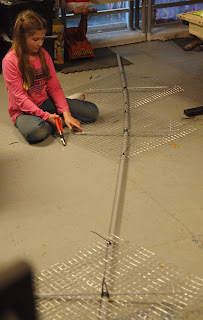 My bellflower seeds are starting to come up, and I have some new pots to grow basil indoors and to split out my new hosta plant.  I replanted the marigold seeds.  The hosta in the garden from years ago is coming up very prettily.  I should start some cucumber seeds as I think Gennet ate half of the ones that came up while she was roaming my garden.  The okra was up and several other things were showing.
Posted by RheLynn at 7:46 PM