Ivy has rooted and mystery plant

It has been nine days since I split the ivy, including trying to root a piece of it in a jar of water.  It has succeeded, from all I can see.  The two 'extra' ivy pots seem to be doing fairly well and have some new leaves.  The original ivy pot has new leaves as well, even on some bare stick that I cut the sample piece from.  And, the sample piece has roots in the jar! 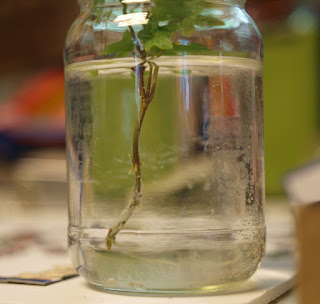 Also, Mark saw this mystery plant on the road and wondered what it was.  My first guesses were sweet potato or moonflower relative.  I think now that it is something called 'wild yam' or 'air potato' vine - which can be invasive in some areas.  Where it is at it is doing no harm - looks pretty and is climbing where otherwise poison ivy would be. 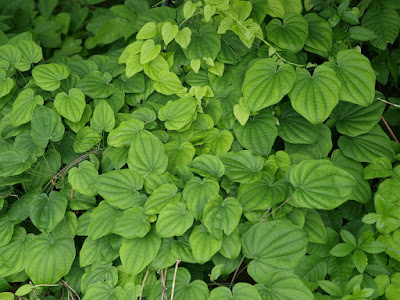