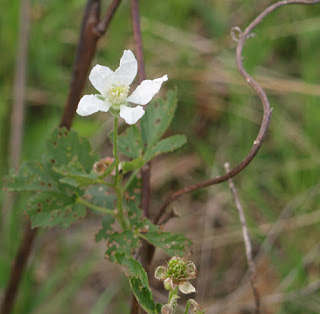 It's finally Blackberry Spring.  Allergies are running for Esme... things are starting to bloom.  I have had some curiosity about some local plants and have been making a photo collection. 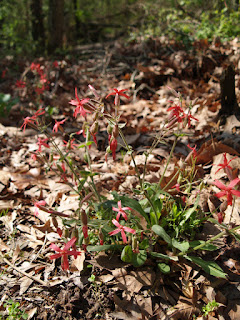 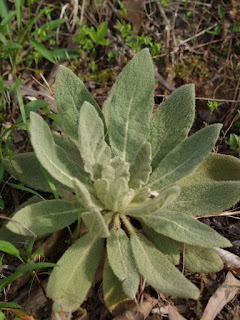 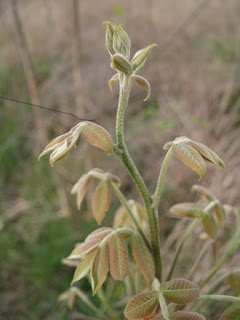 A shagbark hickory sapling.  I took the picture because of the bronze like color of the leaves. 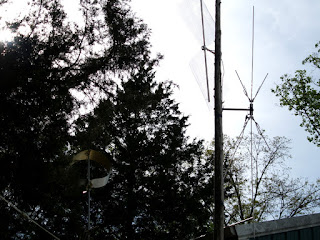 Mark's two antennae - the loop antenna is to the left, and it is the new one.
He got a station that was speaking Mandarin Chinese on that one, as well as the Spanish speaking ones we were getting with the other antenna. 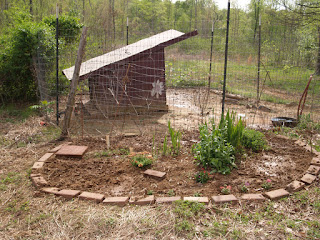 Garden 'stage 3'.. put up a trellis (hard to see) on the left side for the morning glory seeds.  Planted zinnias, cosmos, okra, cucumber, nasturtium and tithonia (Mexican sunflower).  The marigolds and radishes from the other day are not up yet.  Prepared a place to put Esme's school cabbage.  I put a few bricks in the center and a board behind to have free stepping places to weed later when things are grown.  I also made an 'expectations' chart of germination dates so I will know what I'm looking to come up by when. 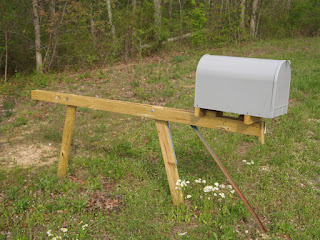 Our mailbox project from last week.  We needed to mount the large mailbox but the gravel was too deep and hard close to the road.  We bent the old stake back and put it as a support for the new construction.  Mark put this together in about an hour and I helped him pound the other stakes into the softer ground beyond the gravel.  Esme says it looks like a dog :)
Posted by RheLynn at 3:10 PM