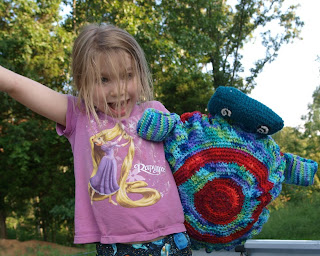 A turtle pillow I've been working on for her to have in her room.
He needs back legs and a tail - but that will take a bit more of that color yarn. 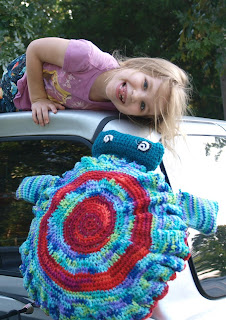 The good thing is, she likes him.

I didn't get much else done this weekend.  She did a little geography and writing practice.  We went to a local event and met up with her best friend again for a few hours.  She spent time with Grandma.  I watched a lot of DVD television while crocheting and knitting this.  I did a little garden yesterday, but failed to process anything... it is all in bags in the fridge.

Still lots of things to do next week, and another full week of school... she just washed her hair and I'm trying to devise how to get her to go to bed on time after letting her sleep in two days in a row.

I got the firmer stuffing by mistake last week - and she says he is not as comfy as she had hoped he would be.  She really likes my hexagon pillow that is on my bed, and it is full of the really soft stuffing.  I guess Mama lives and learns on which she prefers.  I told her the turtle might not be so good for head sleeping but he would be better for sitting on the floor.  So, she tried to take him into her bed with her and found that was not conducive to sleeping... *roll eyes*.. and I put him back in her tent where he was intended to be.  Maybe I can get the other stuffing and do some turtle surgery on him.. or just have the right track for the next time I am feeling largely crafty for a project.

Irons in the Fire:

I have some baby toys in mind for someone at work - a repeat of Esme's 'mimsy' toys... have not gotten myself around to it - barely got my gear on this... have washed and dried four yards of fabric for more clothes and did not touch that all weekend...the school week plus social function took too much out of me.  More than I realized.  I didn't even have Wikipedia or any other science articles open all weekend.  I did discover French in Action  episodes and began to watch them.  I can feel my brain work on that - it threatened to go to sleep thinking about doing more math/science but it was up for language lessons (strange I know....)  Esme asked me about different languages being all Spanish or Chinese and which was where... so we talked about it a bit, and she still doesn't quite understand, but at least she is thinking about it.
Posted by RheLynn at 4:48 PM