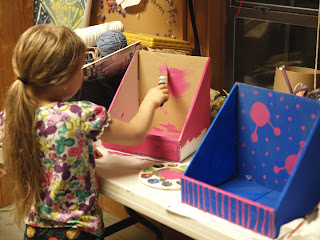 These boxes once held a kind of tool at my store and were left empty on the shelf.  I picked them up and was impressed by how sturdy and clean feeling they were .. they deserved a second life before they would eventually go to rubbish...  I could see Esme's lighter weight magazines and books going in them on the shelf instead of stacked as she has been want to do.  And, she loves to paint like I do.  I started to paint the blue one myself and she came in from playing outside and volunteered for the second one, with suggestions for decor on the blue one.  She decided to leave the bottom of the sides on her pink box white so they look like clouds in the sky.  That was intentional. 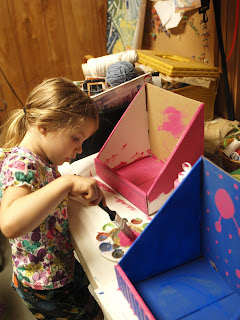 I'll see what she paints on hers for decoration tomorrow... it was late and I put her to bed while the pink layer dries.  We also got a large display board that she has drawn stick figures on, but I hope she will use for writing her sight words on and/or make a landscape in to use as a backdrop screen in her room.  One of my days off next week I'll ask her about it.

Note:
Last night I told Esme I still want to be a scientist when I grow up... she did the 'wait what?' look at me and started to argue I was grown up tall already I couldn't grow up anymore.. so we talked about grown ups might still learn things they want to do after they grow up tall... and she told me I needed to go learn in my books, and she would learn too and be a scientist rockstar astronaut cowboy who goes bounce on the moon with a guitar. Ok, then. Let's shoot for that. 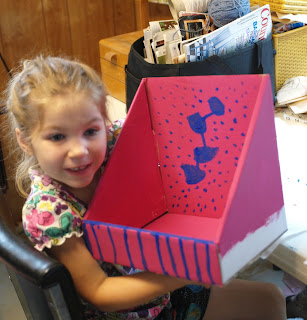 All finished with hers with no help from me.
She is really growing up :) 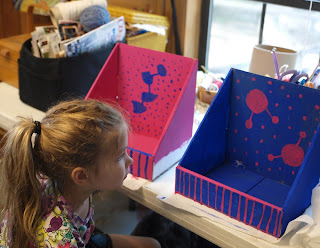 She is comparing the design pictures and realizing hers is different now, I have four - this has six.
Me: Yes... but they are both awesome.
Esme:  They are!  They match!

We did a little homeschool before I went to work today.  I made her a checklist for what she did on the box and she read the words and checked them off.  Then we made a grocery map of our store and she helped me make a list of things she wanted, we looked at the map to find out where they were in the store and marked numbers on the map and the list so we knew which item was where.

Her list: bananas, strawberries, apples, oranges, juice, chicken soup.  Most of that is in the produce section!
Posted by RheLynn at 7:27 PM