as in, describe a few things so I remember them later.  Favorite foods are chicken noodle soup or bologna and ketchup sandwiches.. She wants to grow up and have long hair that is brown like a Mama, and be an astronaut, and go to the moon with friends.  She adores her Grandma and goes to see her often.  She still has Mr. Frog, and also her bear.  She loves to play in puddles and in the garden playing dirt.   She has lost two baby teeth, is 46 inches tall and her hair is nearly down to her waist.  She thinks the story of Rapunzel is partially about her, but isn't quite sure.  She watches DuckTales, My Little Pony and Johnny Test.  She says her favorite colors are purple and pink and white, but her favorite color is really eyesearing pink.

She loves legos, building blocks, Minecraft, flash games on the computer like Spongebob Squarepants.  She plays blocks and Legos and builds things like robots, dinosaurs, houses and dragons - she makes mazes in the blocks for things to go through, or wells or holes for them to fall into and make rescues.  She has an impressive sense of block balance - balancing large wide things on small fulcrums and building oddly and delicately balanced things only to knock them over and scream YES.  Her sense of logic and deduction by observation is still her greatest talent.

She says school is her work like the store I work at - and she is begrudging about my going to work because she wants me to play with her... some days it is harder for her than others.  She has a great sense of humor and LAUGHS.  She is a daredevil, often.  She leaps off the top of her bed and juggles stuffed animals and balls in the air only to have them fall down all around her and fall to the floor laughing and rolling around saying how silly she is.  She dresses up in glasses and hats, and serves tea, and always wants to have a friend.

Her sense of justice is high - she wants to make sure we remember to 'do all the things.'   It isn't always a two way street - she gets mad, frustrated and indignant often.  She still gets mixed up with some of her words, but it is so much better than it once was.  She has to slow down, often - to remember the right words.  Other times she is going 'sixty per' as I call it - and she is just going from one subject to another to another - example, when we drive in the car and she is all full of questions and comments.  She loves my Mickey Mouse impression, and is starting to make a lot more of her own impressions.  She listens to longer stories now, and really understands some of it - and compares it to other versions if I have changed something.  She is no longer a banshee about washing her hair.  She brushes her teeth for the tooth fairy sticker exchange ;)

She still has lots of trouble with her jacket arms.  She gets frustrated often when things (like putting on a sock) don't go her way, and she screams loudly and cries.  She can help with more complicated and detailed things now, but of course - wants to play and jump and run so she loses interest quickly.  She still cannot tell time accurately - doesn't quite understand days of the week or seasons (although she is trying) and is being able to read many things and copy nearly anything.  She can spell some things and do very simple number things.

Recently she has interests about 'going to the carnival' - when is it summer?  Is there a fall/spring carnival?, 'are we going to the McKenzie?' (where her friend lives), watching baby chicks at the stores, building robots and inventing, magic spells and mixing potions, growing up to drive and work...   She spends a lot of time playing with our kittens, puppies and the other animals in general.  She tried to have the goat use binoculars today - which didn't work. She still loves her Daphne dog and Loula.  I think we just lost our Ninja cat, which was the most her cat as any of them.  Commercials she sees on Grandma's TV really get her attention - she has asked us for several of those toys and is trying to understand why she sees it on TV but does not see it in our store. 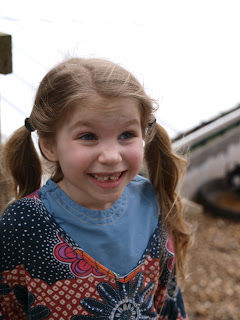 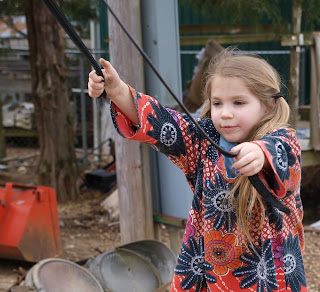 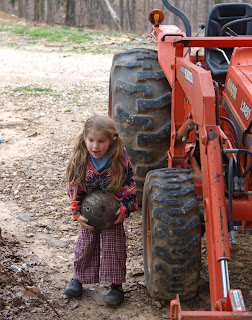 She is wearing one of my old shirts over her other dress.  You can see the two teeth that have fallen out.  She has dirt on her head from playing outside and blue on her lips from eating a ring pop.  Her favorite past times include shuffling heavy things around the yard and swinging from the trees... now that it is warm again.  *ha*  She was out in the woods with Daddy and Grandma today and also helped me find a frog in our garden (actually, I was planting peas - but the frog was there).
Posted by RheLynn at 9:57 AM