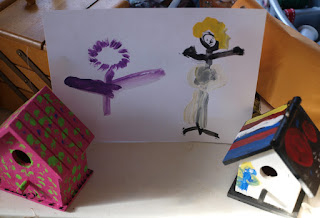 Esme's birdhouses and a painting she did afterwards.  I made the 'petals' on the flower to show her something with the brush and then she went on and did the rest.  The figure is her with long yellow hair and a dress, being like a flower.  This was with the same 'bad' brush that looks like a birds foot and does not have a point to it.  I will dig around trying to find her a better small brush in my collection to use, because she wants to get more detail out of it than I thought she was going to try for. *Mama should have known*

She is at school for a few hours.  She has been playing NickJr. on my computer following a request for a hippo game.  We talked about what hippos eat, and she said a man with the hat in the air told her it was only grass - but he was not on tv, maybe he was on the computer - she couldn't think of where he was.  I thought they ate fish and grass - but she is right, they are almost entirely vegetation eaters, with some chances to eat carrion and other meat when they are stressed, but not really 'built' for that.  We learn new things every day - Daddy says they also have pink milk that has a sunscreen chemical in it and it is dangerous to humans.  He saw an article on that recently - so learning really new things!

I begin my three day vacation today.  I have a few little sewing things that should be done but other than that and a trip to the library for Esme tomorrow we are thinking to take it easy.  Tomorrow is our six year anniversary - six years since Mark came to get me in the coffee shop in Paris that morning... and we both agree it has been a wonderful and with Esme, adventuresome, six years