trying harder : pattern for a jacket 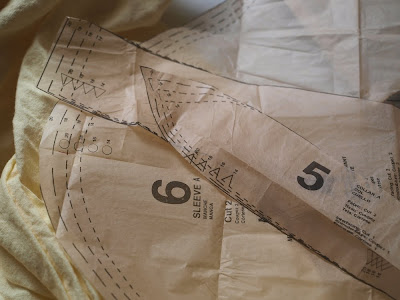 I bought a simple pattern for a jacket last night on my grocery stop. A jacket for me - which is not so simple. With my job including heavy lifting I have very large biceps for a woman. I have a hard time fitting even ready made sleeved shirts unless it is several sizes larger than the rest of me.

We have a dress code at work that does not allow sleeves shorter than mid bicep, but most of my light jackets or sleeved shirts get too hot as summer comes on, or are too light to wear without a second shirt underneath etc... I had a hard time last year striking a temperature balance while working in the rafters, then hours later sitting in the air-conditioned office and then to working outside etc.. a lightweight cotton shirt jacket with or without closures would be a good thing to add to my wardrobe skills.

So.. I bought a pattern for a jacket several sizes up - and then have used newspaper to trace out the smallest size in the pattern to test the sleeve. That sleeve fit. Hmmm. Now to trace out the same size of the front and back of the jacket, try it on in some cheap flannel I have and adjust it down so it fits the rest of me. That is where the hard task comes in, adjusting that sleeve size to the front and back after I get them to where they fit. Definitely brain exercise.

Other Notes: I just watched Esme take her two elephant toys and have an entire 'conversation' back and forth between them. She was holding each by one ear and they were kissing, fighting and talking, although I didn't understand all of the words she used. At the end each one said 'bye bye!' to the other and then she threw one over each shoulder, stood up and went to find a book without one look back to see where they landed. Now this kid cracks ME up ;) heehehehehe She also was fairly good eating her own miso soup this morning from a bowl and spoon. She LIKES miso and begs me to have some 'foop' as she calls it. Eventually though she felt the need to dump the last lump of banana in the half-empty bowl and watch it go kersplash over and over... so all the food went away. Banana in miso.. yuck!
Posted by RheLynn at 8:14 AM