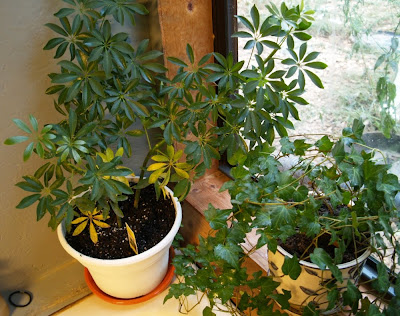 My big project today was to re-pot the houseplant on the left (Shefflera, umbrella plant). I got it when I started working again and by now it was in a much-too-small pot nearly the same size as the ivy next to it. It also has some yellowed leaves from low light - so I tried to give it a better spot this time. Esme loves to go to the greenhouse and I love to watch her explore there - so we went and scoped out what they had. This time of year it wasn't much. But I did buy the white pot there and went on to the big box store to get the platter under it and a new Shaun the Sheep disc that was there. That makes three discs Esme can switch off on so we don't get so sick of them. She also watches the Wallace and Gromits and any other stop-motion cartoons we have, but none except Shaun turn her into a 'zombie' 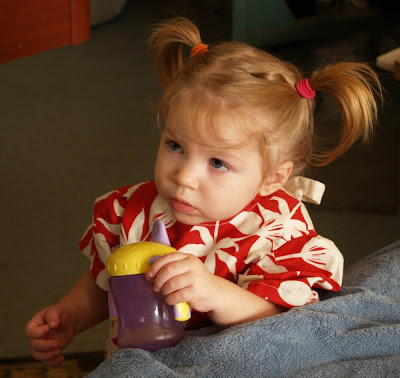 She just stands there and watches until each episode is done - takes a turn about the room and as soon as the next starts she's in the same place. Scary! The sheep zombies are upon us!

And cheetos. Here she is making a big deal out of 'mmmm' cheeto. Between this and fried chicken today she's had enough junk food to last a week! 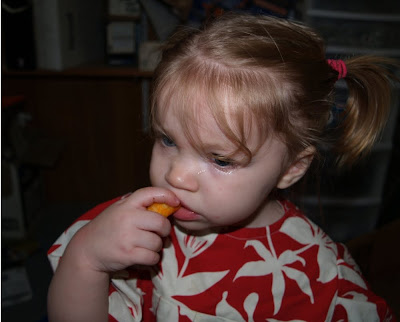 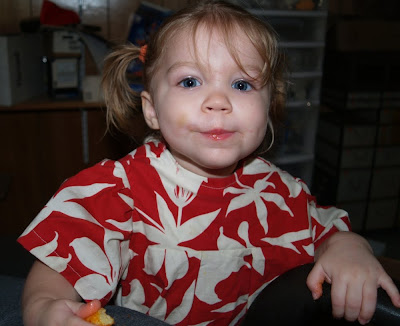 Note: I've had that ivy ever since Fargo - way back Fargo, in college. I rescued it from Hornbacher's grocery store's clearance rack for 3.99 when it was about 5 inches square or less. It looked lonely as I waited in line for the bank window there -- and it came home with me. This is a clipping, not the original plant - I lost that one and it is presumed dead. Everybody I have given clippings off of it has killed them - except this one I gave Mark long ago. He still had it sitting in a jar when I moved in here and it has been vigorous ever since. I'm thinking of making another cutting off of it to put in our upstairs here.
Posted by RheLynn at 4:15 PM