I've always had 'fish dreams' - where the fish are dying, or the water is running out etc... and I can't do anything about it. They always upset me, and in college I had a good friend finally analyze them (she later got a PhD in psychology). She suggested the fish were my hopes for the future - and that the dreams were a sign I was feeling a loss of control and inability to protect those hopes from outside forces. Eriu hit that nail on the head, in my opinion.

I don't get the fish dreams as much anymore, but I still look hard at them when they do appear. I'll always remember a beautiful fish dream, the first where they weren't in danger, and didn't die - and that was after I had made my decision to come here with Mark. Tanks covering an entire room, full of beautiful goldfish, and he was standing there talking to my stepfather. Neither of them knew each other yet, and that dream made a very powerful image. Someday, I'd like to put that image into a painting.

Last night I dreamt Mark and I were moving fish from one tank to another - but the second tank had carnivorous fish in it, and they wouldn't be safe there. We were talking about setting up a third tank (we have been, in real life, as well - it's on the porch), but it wasn't set up yet and we already had four fish that really did need to come out of the first tank. I ended up putting them in a small jar while we kept talking about what would be a better place for them. Again though, they didn't die - they were just in a holding area, waiting to see what we would do with them. 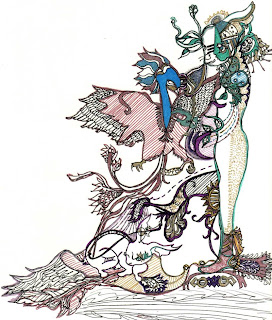 'Expansion of the Universe' (birth of a child)
artwork Oct 21, 2007 11 pm
I hadn't done one of my random-line drawings in a while now, and last night seemed like the time. Some of you might find the above drawing a little explicit - but hopefully not, as the symbols are pretty obscure and hard to distinguish from one another in general. To me it's explicit - but in a good way. It talks about our baby being born soon, and about the growth, life and responsibility coming from that event.
Posted by RheLynn at 4:48 AM

Intriguing reading of your fish dreams, glad you're not having bad ones very often! Interesting about the juggling of tanks and carniverous fish, having a child certainly eats up lots of things and requires juggling!

I must have totally missed what your drawing was because I couldn't get explicit anything out of it.