We've been busy around here, the beginning of the week is always that way lately, which isn't a bad thing at all. We've been looking for more ways to find out what Pixie's medical issue is. I've tried lots of internet groups and forums, even an 'ask the vet' which gave us pretty much the same answer our vet did. It's a tough case considering it isn't tetanus, or at least, it doesn't look like tetanus in any other way yet. We put her x-rays up here. We've had a few good reccommendations -- and if they pan out she might have a chance. 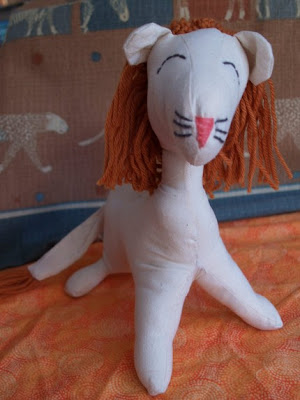 Second lion
It felt like I was tying wool lion mane hair for three hours!

I'm on the fourth version of the lion pattern, lions 1 and 3 didn't survive to be finished. Lion 2 was a little skinny (see above) but he is cute enough for his stuffing ;) Mark says he looks like a surfer dude: 'Like, RAWR... dude.' I'm also working on a very simple rag doll rabbit pattern to work up as a .PDF. 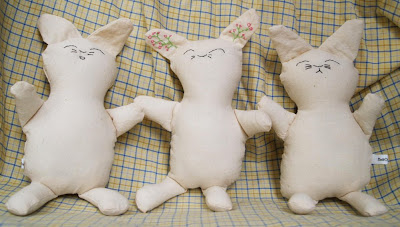 These rabbits take 30 minutes to an hour each from tracing pattern to finishing faces. The hardest part is making sure their legs and arms and ears are in straight. Sometimes when you go to run them under the sewing machine, they move around! These are nice 'I can't sleep' items too, I did one of them at two in the morning last night.

We went to the flea market yesterday and found some interesting vintage finds to list on Ebay and Etsy. Mark found an Underwood typewriter for a steal that still works in most ways -- we're examining it today.

Absentmindedness: I exploded an egg on the stove this morning. Apparently I wasn't that hungry for a boiled egg. Luckily the type of pan it exploded in survived the impact so it wasn't that much of a disaster.

Pregnancy Dreams: Also have been having more and more very 'real' feeling dreams about the baby's delivery. Last night's was pretty scary, and I was glad to wake up. I don't worry about it a lot during the day, so I guess I make up for it at night. We have another doctor's appointment today.
Posted by RheLynn at 8:37 AM

The lion is very cute!

Poor Pixie! I hope it's some weird virus and will go away rather than some neurological thing.

Cute lion - he reminds me of a technical support guy for some reason!

Your new softies are just wonderful!!! You've been so busy. Hope you're getting as much rest as you can - not long to go before baby Bazooka makes her entrance!