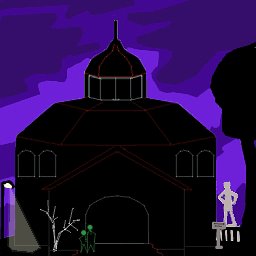 Links:
I like this guy --> Michel Deguy, poet
Diddle has finished his alphabet series
Another great blog (with better illustrations than mine *grin*) and cute crafts!

J and I walked uptown, got apple pies and hoarded the local newspaper at the restaurant. Its the little pleasures, isn't it? We got back just as the sun had set. The sky was a purple-blue over the courthouse, which was aglow in soft lamplight. It was at that moment just before it gets 'dark'... and the light was perfect. Our street actually looked pretty, even though nothing was really out of the ordinary. We agreed we need to start scouting for our own digital camera to catch things like this.

After getting back, we put up our third bookcase in the front room. We still have more in storage. Even so, we could give the local library a run for its money on non-fiction ;o)

Knitting!
Cast onto my size 1 bamboo needles with two colours of Knitpicks Palette. This isn't large enough to be a sock -- maybe my Puss 'n' Boots will be knit.
Posted by RheLynn at 5:50 PM