More How to get a Sheep to a Minecraft Island in Survival : The Isle of Semmerly

The Ongoing Saga (sheep bit is at the end)

In Year 45, Zade Perkins made a trip north of Meltius Island (see last post) to see what he could see.  He went directly north and eventually ended up on what he would name Sleeping Turtle Island.  Then, he headed even further North until he reached the Land That Does Not End.  It did, eventually, but it was a land entirely of giant forest taiga, mushrooms, podzoil and mossy cobblestones.  It went on and on, farther than the trip from the mainland to Amularia. 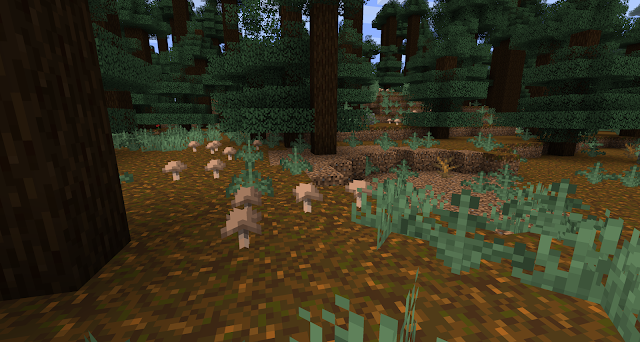 The Land that Does Not End

After this, Zade came back home and accidentally ended up on island covered in sunflowers.  This he took note of, as he had never seen the flower before.  He carried some with him a bit further South and ended up at the shore North of WestSea.  After spending a little time recuperating with them, and recounting his journey, he returned back home to Herminda on Melitus with a little bit of everything he had found and not too much need to go adventuring again for a while...

Oliver Daniels, son of Peter and Maisie Daniels, at WestSea, decided he was going to find the island the flower had come from, and see if he could make his home there.  His mother had died in the fever at Rosered in 44.. and like several of the other survivors, he wanted to go out further into the world and find a better place.  He had been inspired by his parents' search for a land of their own, and with elder brother Alexander minding the crops, Magdar entirely immersed in her paintings, and his twin sister Callista working with the sheep, cows and horses at WestSea, he felt he needed to move further afield.  Towards the end of the year he made his first journey North from the road north of WestSea, and found the island quite easily.  It was still untouched, he believed, by human hands, and was home to a small population of cows, numerous sunflowers, and a cactus - another wild item that Oliver had never seen before.

He made a journey back home to collect tree saplings from the orchard at WestSea, wool for a bed, seeds and a few other things he thought he would need.  Then, he returned to the island.  When Zade had mentioned it to him he had been in a naming mood,  and after naming the first Sleeping Turtle, he had suggested Semmerly or something that sounded like that, to Oliver.  Oliver had been thinking of the island with this name for two years, and now, as he built his house, planted fields and orchards and rounded up cows, he became more and more attached to the name.  He carved his sign for his house as 'Semmerly Hall, Isle of Semmerly'.  He has let it go to his head a little bit, as he is also now calling himself 'Lord Semmerly', being the only human being out on an island can be a bit isolating... 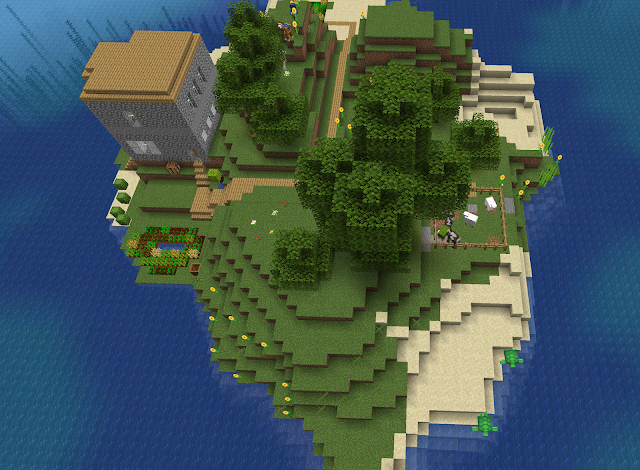 Oliver has established the territory as his own, and it is on the books as far as Rivertown.  He is trading green dye from the cactus as well as sugarcane, apples, wheat and watermelon.  He put some thought into how to get some of his sister's sheep out to the island - especially since the last time he visited one had gotten out of the pen and sat in his boat for hours.  He could get it to come out of the boat with a lead, but he couldn't get it to stay in a boat and be tugged by another.  Semmerly Island was much too far away to do the trick that Zade and Martin had done at Pagossus, which was creating a zigzag trail of blocks across the water's top.  Finally, he just got in his boat with the lead still on the creature, and surprisingly, it began to swim... He rowed slowly and stopped every little bit and made sure it was still there.. but it made it to the island just fine.  After a few weeks, he went back and asked Callista if he could take another to start a breeding colony of green sheep.  She laughed until she fell over.. but said 'yes'... 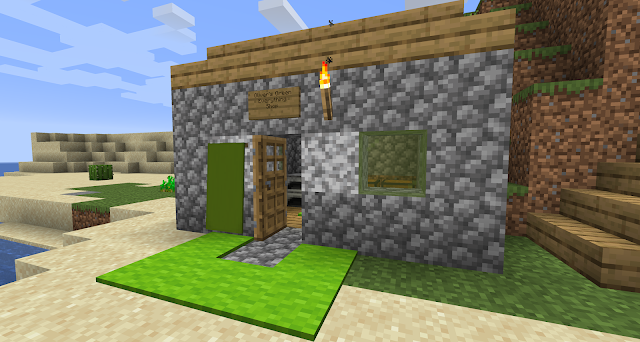 So now Oliver is exporting 'everything green' from Semmerly - green terracotta, green glass, green wool and carpets... He has built an extra story on his house with three bedrooms complete with carpets and bookcases.  And now, he is looking for a wife who wouldn't mind tending a cactus farm.  I think he'll have to move it a bit further away from his front door, though - there is all that other part of the island that is sandy!  Who wants to stumble out onto that every morning or in the dead of night?

As for the island being 'untouched'?  Not so!  In digging a mine to get andesite (andesite and iron go hand -in- hand Joseph Decroix says - and he's been right almost every time) Oliver found a buried treasure chest in the sand near the water's edge!  It contained emeralds, lapis, a book of Protection and a magical Silk Touch pickaxe.  Oliver is a rich man even without the 'export business'... but with all of the things he can grow and produce on Semmerly island, I think he will be quite happy there.

Oliver has circumvented the main continent, from Semmerly island all the way to Henrick's Pointe, which from there is the gateway to Brandywine Farm and the Remnants of North City.  However, instead of heading that way, he skirted around Vanter and back to Rivertown, on down to Piper's Cove and Cod Bay, where he spent some time talking about watermelons and weaving with Mandra and Pomra DeAryl, and world exploration with Dennis Danby.   He provided cactus for Iago Orak and his sons to start growing on the shores with the massive crop of sugarcanes.  Hopefully, it will produce green dyes that Mandra can use in her weavings.  He did a little flirting as well, with the DeAryl and Otrio daughters, and between the three of them he has some prospects.  But the watchful eyes of both Mandra and her brother Bevan can be a little daunting.

Kynee DeAryl, daughter of Bevan DeAryl and Pomra, has made the journey halfway across the known world, and has settled at Semmerly Island as Oliver's wife.  Her sister and brother had recently gotten married as well, both of them staying in Cod Bay.  Even her cousin Wirna finally said 'Yes' to the Pippington boy,  and moved into a fancy house by the bank.  But Kynee was most intrigued by Oliver's discoveries and seafaring back when he visited a few years ago.  Now, with her younger sister married to Bram Trent she is feeling like it is time to settle down as well, just not 'settled' so close to home... She wants to go out where there is some adventure!  She has brought with a loom, from aunt Mandra, and was very excited about the prospects of growing all sorts of dye stuffs, not just green, for use in the shop that has been put up on the island.  It says 'Oliver's Green Everything Shop' 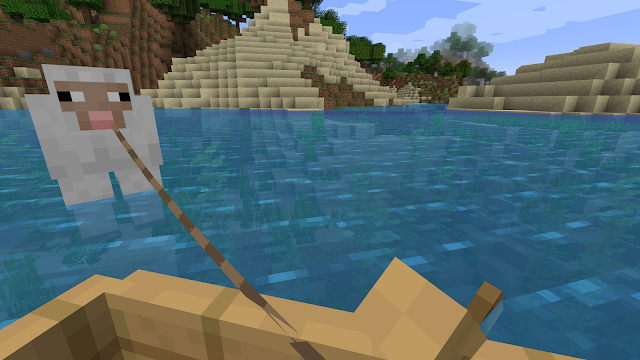 Long story short : If you go slowly with a lead and a regular boat you can drag sheep or cows to your island from a good distance away.