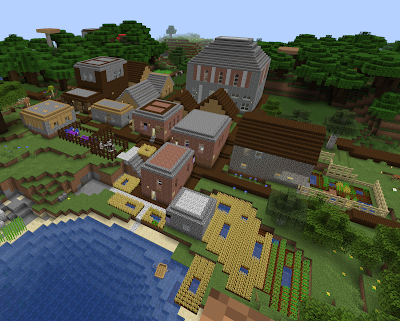 Pillager Attacks tick up around Piper's Cove.  They have also been seen halfway to Rivertown in the swamps.  Injuries sustained twice.

year 36 : courthouse roof finished, helped by Carver Robinson, who has moved in next to the Forestry Trust, building two story cobblestone

year 36 : Carver Robinson (of Rivertown) moved in, courted and married Iris Allen (piper's cove) started Robinson Farm (kelp, pumpkin, wheat, carrot, potato).  Carver is a miner and has been working in the quarry behind Danby Street - found obsidian portal and treasure.  Also, has found with Dennis Danby an abandoned mine between Cod Bay and Piper's Cove - large amount of string, terrible monsters.  One night, fought six zombies in a row and almost died.  Iris is a farmer.  Iris traded with Pomra DeAryl to catch and trade an emerald from the DeAryl fortune (made by trading with her village, clay and brick products)  for melon seeds.  Iris then bred up the melons with bone meal and gave back seeds in dozens to Pomra, which have added a new food source to the village and a trade item to be traded to all other cities. 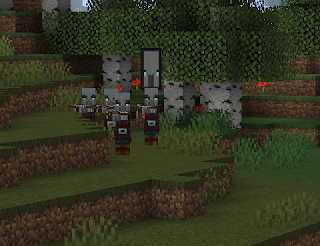 I hate these guys!  They keep showing up and making me rearrange my cities with escape tunnels and lookout points.  They literally have 'changed the shape' of civilization as I build it.

long lost pirate son of Goffey Orak, much younger brother of Priscilla Pippington, landed and began building across the bay and clearing forest - finally approached Priscilla and showed her the blue bead necklace he wears - and she agreed he is her brother.  He reports news of their mother's death on a far off shore, and learned of his father's death here.  He bears a striking resemblance to her son Argent, as well - and they are only 9 years apart.  While traveling for trade and building his house, he met and wooed Tasha Benson, second daughter and youngest child of David Benson of Benson's Pointe. 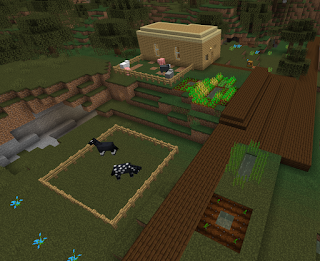 Meadowview Farm : Alvin Allen (b yr 21 Pipers Cove) emigrated : halfway between Rivertown and Cod Bay on the South Side, entrance to the swamp, plagued by monsters from deep caverns nearby.  Has horses, pigs, sheep and growing carrots, wheat, sugarcane and pumpkins.  Oak tree orchard producing apples.  Traded apples with Dennis Danby for carrots to begin feeding his pigs.

Sam Sevier (Rivertown) invests two of his cows and wheat harvest (18) to Piper's Cove) helping Piper and Paul Allen build new animal pens to begin a breeding and livestock trade company.   Also encourages harvesting of kale and production of glass.  Kallum Allen, age 15, scores an extremely lucky find of 11 iron ore stripping sand from the beach - takes up blacksmithing as Sevier's apprentice - begins to mine coal and iron in the quarry his father began at Piper's Cove.

Benjamin Pippington (Ravenna) and Thomas Benson (Benson's Pointe) trade with the natives of the Eastern Village, clay products, as Niko and Bevan did before with the Aryl residents, and split 10 emeralds between them.