Paul Daniels came to the city of Rivertown more than 60 years ago, to join Gary Pippington in making the stones and glass products for the growing town.  And his son Peter did not want to be a stonecutter - he was an explorer.  He helped his father find the Western Sea from Rivertown and build the Western Gate Spire, but soon after ran off with Dan McElvaney's daughter, Maisie.. and started a whole new chapter of settlement that has continued to spread North through numerous islands.  Their territory WestSea is the Northwest most corner of the continent Rivertown was founded on.... and Semmerly is an island north of WestSea another Rivertown descendant discovered and passed the knowledge onto Oliver during a trade visit.

Now, Oliver Daniels has become 'Lord Semmerly', having travelled north from his father's homestead territory of WestSea, and settled on the island with Kynee DeAryl, from Cod Bay (another 'spin-off' city from Rivertown, of which there were several in the 20-35 year-marks from the founding of the town).

Much was lost in the Great Earthquake that devastated North City, the center of civilization, in Year 30 (30 years since Rivertown founded).. which is why Rivertown is now the central mark of time and records.  In these Sagas, we follow the descendents of the families that founded Rivertown, their spread throughout the recovering world meeting with Native villages, refugee groups that also escaped the Great Earthquake and came looking for a place to settle in the South (like the North family of Rosered etc.)... 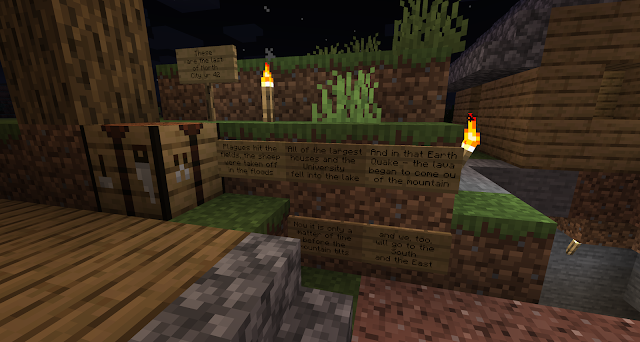 See above the signs in North City Remnants (Griessen farm), the small community of outskirts of North City that were not hit by the quake or its aftershocks.  Where the great city stood - with the famous University - there is a huge hole in the ocean and tall spires of stone brick and rock, a lava flow from the mountain and a coral sea growing over all of the underwater ruins. 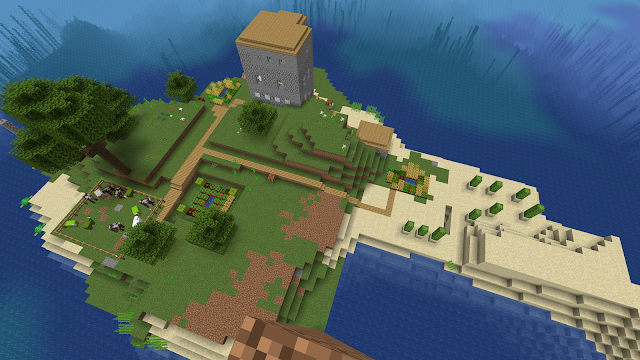 Sebastian discovered, quite by accident, how to make a grindstone to sharpen and repair his tools.  He has only ever heard of 'enchanting' which is being practiced in the Porter Thomas school in Rivertown as of year 45.   Apparently the grindstone can also disenchant bad enchantments from objects, like the fishing rod cursed with Vanishing his father Oliver found in a chest in a shipwreck... But, unlike an anvil, it can't help you learn how to enchant things...

But what use is the object, really?  What can it do that an anvil can't?  Well, it is simply that it is cheaper than an anvil.  While an anvil requires 3 blocks of iron (9 ingots each) and 4 extra ingots of iron - the grindstone only requires a stone slab, some sticks and planks to make.

An anvil takes 31 iron ingots to make!  That is expensive, and even more so in this recovering world, where even cactus was lost to civilization until the rediscovery and farming efforts on this island.

What does the grindstone do that an anvil can't?  Well, nothing really.  In fact, it does a bit less, because it requires a duplicate item of what you are repairing and combines the condition of the two to make one item.  See below.

Two somewhat used axes turn into one good one.  Useful?  Maybe, maybe not.  The grindstone does NOT take extra iron ingots or stone to repair a current tool - like the anvil does, which can really help resources.  One stone to repair the axe instead of three and two sticks?  Useful.  But - as I said, the anvil is expensive.  Even in the best year at Rosered iron mining community, Joseph DeCroix only found a little over 64 iron - and that was with the help of seven working men deep in the mines with monsters at every turn.  A grindstone, especially in a little island shop, may be the answer to keeping yourself in tools.

And it adds a great 'ambience' to your rooms - just take a look at the great decorating in Semmerly Hall, below... 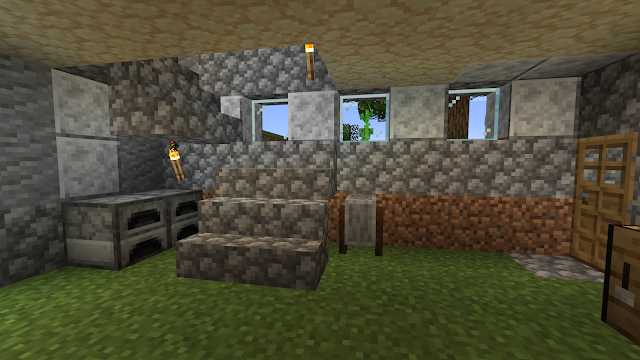 Kail Daniels is the one in charge of mining iron for the island - and so far he is only up to 16 ingots, 3 of which he has used for a new tool.  It might be a long time before this workshop ever gets an anvil!