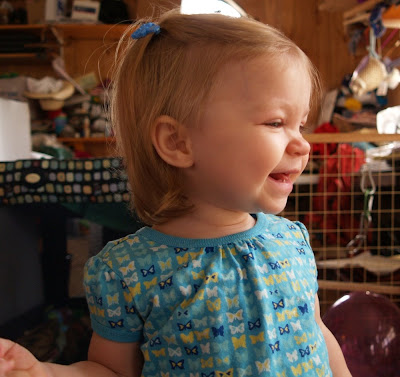 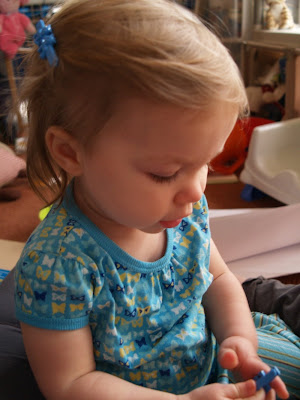 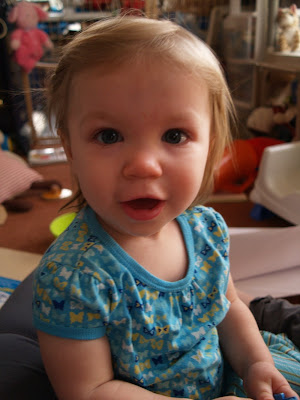 I told Mark this picture 'looked most like her' - and he said 'they all look like her, what do you mean?' This is the expression she is wearing most of the day, just happy and kind of wondering what is going to happen next. 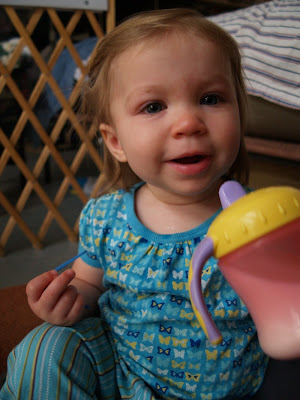 I haven't accomplished much in my first day and a half off. We've been outside once but it was really cold so that didn't last long. I've started a pair of red overalls that might fit Esme 6 months from now. Hopefully they don't take that long to complete! I tanked the green weaving because it was just too narrow to do anything with.

Mostly we've had fun with Esme with balloons and books and musical instruments. We've watched some Mythbusters and some cartoons with her. She counted '3, 2, 1!' with the Mythbusters crew last night when Mark and I were reading the Internet. We both stood up and looked over at her in her play area -'Did she really say that?' and then she said it again. How funny. We also watched 'Milo and Otis' again and she was so excited to see the orange kitty (just like Mitzi) saying 'kitty mrao!' while pointing to it often.

Still no visiting yet - but we're all getting better slowly.
I need to print out these pictures and send them to my Mom in Minnesota - she called the other night and thought pictures from September were most recent... I'm pretty sure I've sent more since then at the very least! Mom is still having her memory problems some, and I reminded her the date was written on the bottom front of every picture. 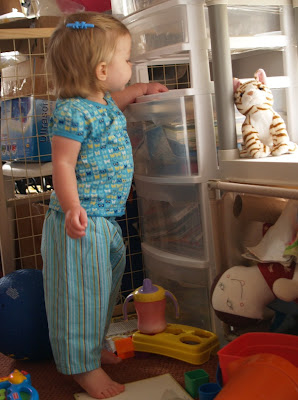 Here she is getting me a book. Lately her favorite is 'Alligator's Toothache' which has no words and Mommy has to interpret what the animals are doing in every scene. She likes the part where the alligator hides from the dentist - but doesn't like the 'ow ow my tooth hurts' scene at all.

Esme's favorite snacks : Corn bugles and canned carrots are her absolute favorites. If I let her have too many carrots her cheeks turn red - so she only gets a few a day if that. She'll go right in the fridge when I have it open and grab the carrot container and beg for one. She likes animal crackers and graham crackers and a potato chip here and there too. Dry cereal of many types, bananas and cereal bars are extended breakfast items and fish, chicken, hashbrowns, spaghetti, corn and bread are surefire foods at dinner. She picks at a lot of stuff but all that I just listed are things she will chow down as soon as she sees them. She loves her milk and juice and drinks water all day long.

She's a girl after my own heart - Bugles are my favourite snack. I can't believe how tall she is getting!