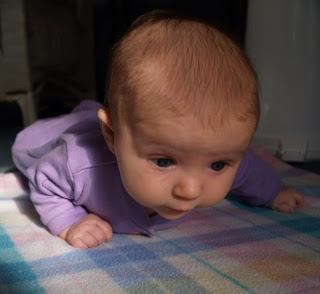 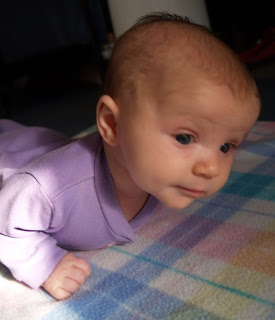 Esme has been practicing her 'push ups' during tummy time. She doesn't like it much though - and these are the first 'happy' pictures I've been able to get of the process ;)

Mark's parents went to visit his aunts in North Carolina last week, and came home with a bunch of baby clothes and other items for Esme that had been waiting out there for her :) Very nice of them indeed!

That set me to going through all of the clothing we have for Esme, that has come from so many of you (thank you!), our relatives and the flea market. Esme has already grown out of at least a dozen items she fit when she came home from the hospital! They're all too short lengthwise now. It amazed me! The best of those I think I'll pass on to Elizabeth as she will be getting about that size soon.

The other thing I noticed is that sizing is very crazy in baby clothes. There are 6 months clothes I had put away that already fit Esme and things that say 3-6 months that are still obviously too big. There was even a dress that said 18 months that looks like it will fit her and a dress that said 6 months that looks like it is for a toddler! I sat on the floor and pulled things out, holding them over her body and putting them in three piles 'now', 'soon' and 'later.' That made plenty of room to put the new items the aunts had sent as before that all the 'later' was pretty disorganized.

I can't believe she's holding her head up like that. I've noticed the complete lack of standards in baby clothes as well. Of course, things won't improve as she gets older, so I guess she may as well get used to it now.

What a sweetie! Go Esme!