And then there was one... 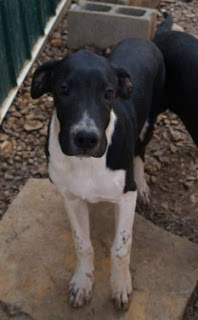 We gave away three of the four remaining puppies this week. Silver and Skinny went together with a Spanish-speaking couple. Double-Spot went this morning to a man with two small children. Squeaker has won the puppy version of 'Highlander.' The prize? He gets to be a house dog as much as all the other dogs here now. He can come in and go out whenever he asks. He's pretty happy with that idea. Out of all the dogs Pixie is actually the one missing the puppies the most. Even Dee-Dee (the mother) isn't quite as unhappy as Pixie. Pixie took on being their bear rug blanket from the time they went outside right up until last night. For all her problems (her jaw still does not open much more than an inch, and the vet can't fix it) she is still hanging on and enjoying every bit of life that is given to her.

Aaaw Squeaker is so cute! Poor Pixie - I'm sorry to hear about her jaw problem.

A Dane is a big one-so it should be 1 and a half.Ha. I used to have a Dane years ago-I loved that dog. She was the best. The toys you made Esme are cute.

He's a sweetie! So, are you going to keep him, or continue to try to find him a home?

How many dogs DO you still have??