Every morning when I am awakened (even sometimes quite too early) I am amused and amazed at what this little girl has to tell me, show me, and has often already decided upon for today's routine. It's hard for me to believe sometimes that she is three years old - she has all these ideas and isn't afraid to express them. She thinks she knows exactly how things are going to go, rattles off the list of things she wants to do, and crosses between sage nodding and teenager 'do I have to?' attitudes when I tell her something she has missed/skipped/avoided.

I told her she had to wait ten minutes for the alarm clock this morning because she was already telling me she needed apple jacks and drink cup and to go tell the kitty she was a bad kitty and put her outside etc etc... I said I wasn't getting up until the beep beep went off. She threw a very small fit and then she asked me if my ears were alright and if my hair was alright and why I didn't get up if I was sick etc... So, she had me grinning by then. And she knew it. So she went and found her 'Hop on Pop' book and read me the words she has memorized and described all the pictures in the pages she hadn't memorized. I reset the alarm clock for three minutes out just to have the reinforcement that Mumum didn't want to get out of her bed until the alarm (beep beep) went off. 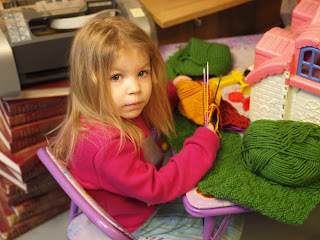 examining her Christmas stocking
and the green scarf as well.

I told her I was taking a picture of her Christmas stocking for Grandma, and she had to be in on it. She actually tried to take the loose (non-working) needle back out of the sock and use it... so she 'knows how it works' but I stopped her there and told her she has to wait for a few years to learn the rest ;)

Oh my, you are productive. I can hardly keep up with my comments on your posts. You have been so very busy. I really don;t know how you do it all with a full time job outside the home. Amazing. The dresses are adorable. The story you told about Esme's curtsy in front of the mirror was priceless. how wonderful to have a mama that can make something just to your liking. She is very lucky. I bet it makes her feel very special to know she has also had a hand in the process by picking the fabric.

I am totally with you about keeping little ones warm. Carter is notorious for shedding his warm layers. He has recently learned to take off his own shirt and it has not made matters better. Keeping blankets on him during the night is difficult (and we co-sleep). I have been wanting to knit him some socks - maybe after all our Christmas crafting is finished. I am amazed how how quickly you knit. You said you are slow, but I think you don't give yourself enough credit. Productivity is your middle name. I suppose having an early riser in the house helps. Carter is also an early riser (like 4:30-5). We actually stopped setting an alarm because he is so reliable. We've tried to get him to go back to sleep, but it just doesn't happen. We may need to get ourselves an alarm clock and start teaching him we don;t get out of bed before it goes off.

Okay, so my husband just asked if I was writing a blog post. I guess this means I've gotten a little long winded. I look forward to seeing how the stocking and scarf turn out.

Aww, thanks - busy is just something in my nature, sitting still builds up nervous energy so I make use out of it. I was a busy child, as well - like Esme is. Eventually my grandparents and mom taught me to do a lot of crafts to keep me out of trouble! I guess it worked ;)

I was thinking and most of my projects are thin yarn -- so I was setting myself up for a long slow work most of the time. These are worsted weight, so some perseverance helped get them done quicker.

I haven't quite stopped setting the alarm yet - but yes, with the little ones around you almost feel you can sometimes! Mark said there will be that one morning she decides to go play instead of waking us up.... but usually if the alarm doesn't get me her feet on the floor definitely do!