A busy Saturday and I found my patterns!

Usually when I have a Saturday off we go visit Grandma in the middle of the day. Instead today we went rummage saling in the morning and then after we got home I began to go through my craft supplies and fabric in the sewing room. I've been meaning to organize it a bit better for a good while. In fact, about two or three months ago I had bought several size 3 toddler patterns for sewing clothes. After leaving them out on my desk for a week I decided it was time to put them somewhere safer (vintage patterns) so nothing could happen to them. I thought I tied them up in a bag or put them in a tupperware or something -- and after that I could not find them at all. I felt like such an airhead losing them!

I searched high and low several times but never went through the entire Pile O' Stuff that has accumulated in my sewing room. I still didn't get all the way through it today - but I did find the patterns. They were at the bottom of my mom's old sewing box I brought back from Minnesota. It's kind of like a tupperware - and they were wrapped in a plastic bag... but still I had entirely spaced the fact that they were in there.

So now to try to put everything back in a somewhat neater order, and see what projects to start and/or finish first. I need to start working on size 3 clothes (which is why I was so upset with myself) and all the other patterns I had not lost were size 2. Esme has grown into her size 2 tops and very nearly into the pants now - so it's time to start thinking about the next size up. I've been saving up pieces of adult clothing gotten cheap at yard sales/flea markets that will have new life recycled into 'Esme-size' clothes. I'm excited about that as the fabric is in nice condition but not 'common' - not something anyone else would have somewhere else - entirely unique for her. 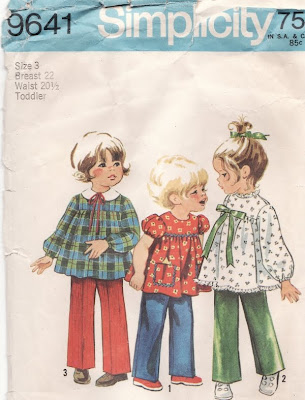 Simplicity 9641, 1971
I'm hoping to make the shirt in the middle of this picture for Esme. The pattern is from 1971. That's older than me or Mark for that matter! It's amazing when you think about it - this thin paper being in 'decent condition' after over 30 years.
Posted by RheLynn at 2:36 PM