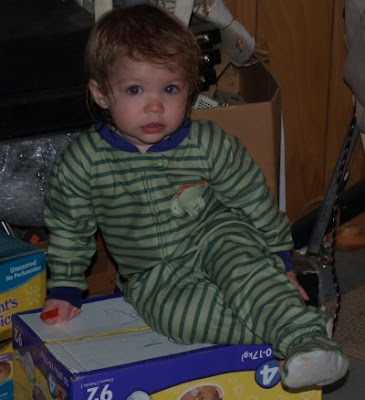 It was raining all weekend, and with the fears of getting sick going around we opted for a weekend at home doing nothing much. Esme was pretty upset about not getting to go visiting or outside - she brought me her jacket and shoes many times. We went to Starfall a lot, drew on the easel and played with letters in the kitchen. She is making some progress on different letters than 'E' and 'O'! 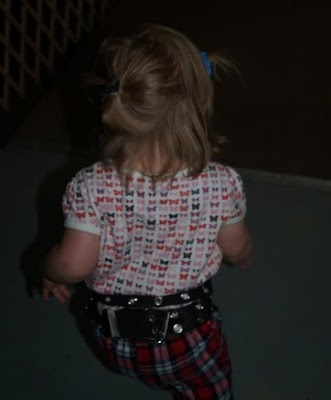 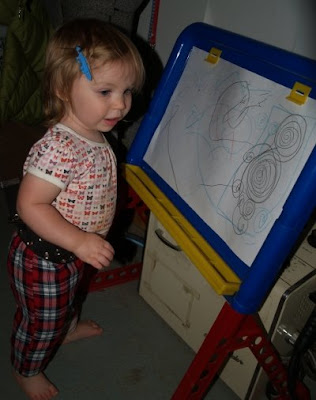 Mark gave her a 'stylish new look' the other day in plaid and a black belt (of mine). The handiwork on the easel is not all hers, the spirals on the right were drawn by me.

And she has grown out of her 18 month old sleepers. It has been cold so I dug out this 24 month one that was stashed in the 'future' box. She thought green stripes was really cool!

some things I heard from her this weekend 'book' (not just her 'read this' approximation), 'ear', 'pat kay'(patty cake), 'green' and 'orange' again - it's been a long time since I heard her say any color words. We were going through crayons in the bathtub and later I was showing her all the green things that matched her new pajamas.

Tomorrow she is 18 months old! We did her 'stats' at home - 26 lbs, 31.5 inches (maybe a bit more but she is still wiggly) and 19 inch head circumference, not a lot of difference physically from her 15 month stats. But wow - she has come a long way in three months! Her vocabulary has more than tripled and she understands so much more about how things work and how to communicate what she wants to do/have etc...


Note: She has grown out of those sleepers - so she has to be a little taller than before, right? She fit into them fine then and now they are too short on her. She almost fits into her 24 month pants but they are just a little long on her. We're going to have to pin her down and measure her better ;)
Posted by RheLynn at 6:55 PM