of cabbage, pens, and antenna receivers 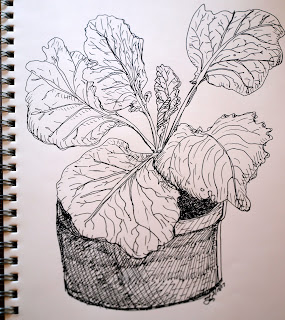 I decided to draw a picture of Esme's school cabbage.  It is growing so pretty, as Mark gave it some fertilizer.  I went through all my pens the other night and kept only the ones that worked in my drawing case.. which was about a quarter of them!  I have a new set coming from our work bonus - Microns from Sakura.. I love those, they can get all the fine details.  This was drawn with an InkJoy gel pen.. not fine detail, but it is very smooth.  Mark said the other day that I should go through my pens like water - because I don't, they dry up.. and he's right.  I need to draw more but instead I just keep myself from doing it.  It's like that thing I do with the last smidgen of milk... let it sit in the container saying 'I have milk.' and not drinking it.  My mom taught me to do things like this.  Inadvertently, I have taught Esme to do it, too.  *sigh* 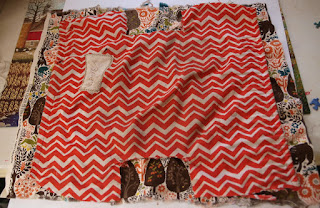 This is the pattern for my lunchbag, in case I forget again.  It is another thing I should do more often.  I had forgotten what I did the first time to make it, and waited until it was in sorry shape to make another one.  It is a fat quarter laid out like an 'H', with two small squares cut out.  Then, the two top lines on each side are sewn tog3ether.  Then, the remaining parts get sewn together in a gusset like shown below.  Then, a drawstring seam is made all around the entire bag and it is finished. 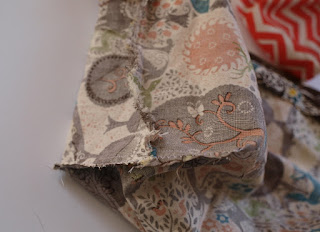 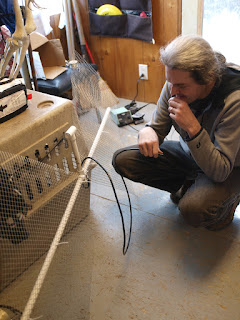 Mark is working on his antenna for his radio receiver.  I need to work more in the garden  if it is truly as warm as they say it will be... I did go out and clear the garden almost entirely.  Mark also got up on the roof and put his antenna up.  I got some pictures of him on the roof I'll post tomorrow.

We went to the store tonight intending to spend some of the bonus on a bicycle for Esme.  She had outgrown her old one last summer.  We got a remarkably good deal on it because it had been put in the wrong place.  We didn't expect that - we actually thought we were going for a cheaper bike than the one we originally looked at.  That seemed to be the best one for the money.  When it turned out to be actually more expensive at the register we did get to buy it for the price tag that had been on it (but wasn't correct).  We felt really lucky and also glad we didn't have to go back and have Esme choose again after going through everything the first time.  This bike will give her some room to grow - although she almost has to learn to ride again it has been so long.  Mostly, just get over the fear of falling off of it and the fact that the brakes are only on the handles and not also on the pedals.
Posted by RheLynn at 8:58 AM