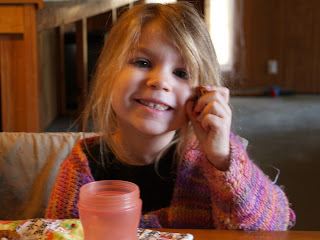 All ready to leave for the morning! With her 'best friend' Tigger the tiger (her cake top decoration) who came along in her coat pocket. 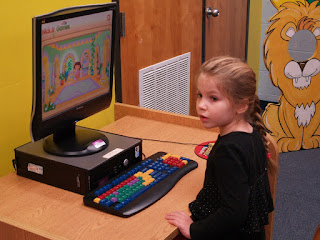 There was a story hour at the library. Half-way through the circle time they started the singing, and she froze up and came and dived into my lap saying she was scared and wanted to leave... I told her if we left we were going home. She did not like that idea. Eventually she decided it wasn't so bad and she went back into the circle and cooperated for the rest of the time. When we used to go to the story hour none of the children were as young as she was then (age 2-3), and she did not fit in well.  Now, most of the children are under three and there was only one other one her age... very strange dynamics going on!

We went to the Chinese restaurant after that, and while walking on the sidewalk the bell began to ring at the courthouse. She grabbed her ears and said that sound was going all over the world it was so loud - and she wanted me to make it stop. When it stopped she couldn't stop talking about how it went all over the world - into every town and it was still going in the air.  She did about as well as can be expected for her third 'real' restaurant experience ever, and maybe under ten occurrences of 'eating in' anywhere at all... I had to encourage her to eat anything that didn't look normal, ask her not lay down in the booth and put her feet in the air, not say the food was scary and cry we had food at home why are we here etc etc..  But she did like the umbrellas and the red ceiling.  I am sure if I do this more often with her (and more places like this that are not 'milkshake and french fry' places ) she will figure out it is not so bad and cooperate with that idea more. 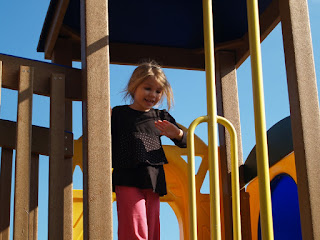 "curious george smile" after she climbed up and did it well...
Another girl came along and showed her how to spin down on this pole - which she did finally get but she was being a rightful scaredy-pants about it as it was six feet up in the air. 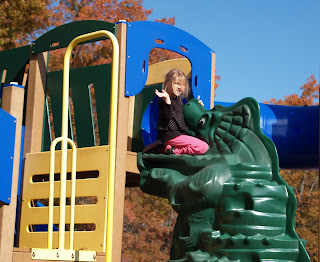 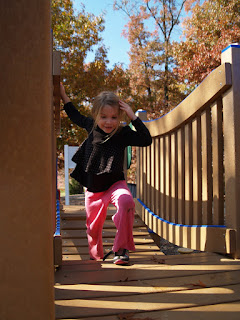 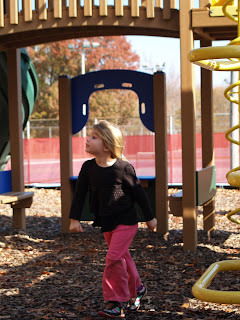 She had a big story about being a 'drinkman' at the counter (shown behind in this picture) and I would give her five cents, or one cent, or a quarter - and she would give me drinks and be the drinkman. She went up in the bridge over several 'days' going to sleep, bringing the drinks, selling them to 'farmers' and their cows and other drinkmen, and then going back to her house to go to sleep at night. Eventually, she decided she was really a drink lady, and she would marry a drinkman, and they would give out drinks together at the counter. 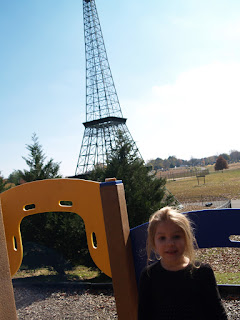 This is the 'Paris' park, with the mini Eiffel tower in it.  I asked her 'pretend you are in Paris;, which got her to give me a 'huh what do you mean' look... 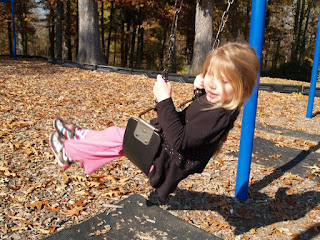 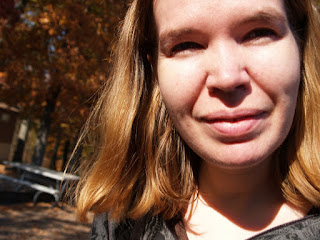 Esme's attempt at using the camera, since this was the lightweight older one we had put away for a while... not too bad of a job!

We went to the Robertson's decorating center after the park to look at things and describe them - smooth things, mirrors, chickens, statues, beds, chairs, couches.... she loved the idea you could go up the stairs and walk all around in a circle.  As we came out the bells in that town, McKenzie, were ringing for noon and she looked at me and said 'See, all around the world.  I told you.  Just like that.'  I nearly fell over laughing and she was a little upset that I did... but I told her that was very funny.  She bought a basket and I bought a yard of cotton upholstery fabric there.. then we went home.

notes// She is working at drawing her thank you card to her Aunt Dot, and I will ask her to draw something else later.  She has told me she wants a giraffe and a spaceship for her Santa List.. but I have told her she will have to sit down and write that letter soon so she should decide well what is going to be on it.