I needed a little mental stretch lately. I began to read Attanasio again, for maybe the tenth time since I was a teenager - Last Legends of Earth. I love that book. It is one of the few I can reread. It is described as a 'science fiction fairytale that spans spacetime'. And the author uses such beautiful language and prose. I always find a word I have to think hard to remember the definition of. I always forget exactly what happens to this character in the huge number of ones he has woven together through different changing levels of space and time - and then sometimes, just before it is once again revealed, the depths of my memory release the details and I am sad to remember before it can once again be a surprise. But, joyfully, there are still surprises that are not kept, as well - and they are sweet. He has a 'new' book, new to me - Centuries released in 2010. You can tell I have not been keeping up, eh? I have put it on an order we may get for my birthday this month. But, I have to finish this reading of LLE. I think it is almost a part of my personal mythology now.. the way I see the Universe, although I don't mean as a religion. I love the way he interconnects all things in it though - which does tie in somewhere along the number line of what I believe. All things react to all else - are always somewhere and albeit separated by thousands of lightyears and time years - some of it still manages to reach out and connect with that which it seemed it never could. That is a deep thought. It is a beautiful thought. 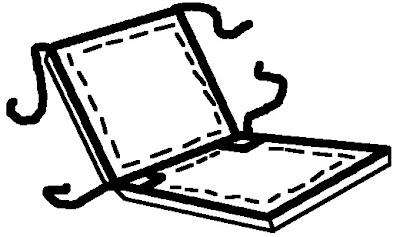 Anyway, enough philosophizing, for now. Besides the book I was cleaning up my worktable - Mark got me a new rubbermaid to put the overflow of fabric in to keep it in prime shape... I was looking through a lot of Japanese books which I have not done in at least six months. The influx of ideas for elegant homemade items has inspired me some again. After that last night I sat down and made a simple sewing chair cover and it was nice to see it come together almost as planned. I woke up this morning from under our handmade quilt and pillowcases, to put on a handmade sweater, pajama pants and slippers... feeling a little Japanese in the fact that all of these are items similar to what I had seen in the books. I love that it is all possible in tiny stitches over time, and last for so long after the moment of 'finish' to become a part of our daily lifestyle. It is almost as if, at times, every flash of memory, music, movie snippets, conversation, it all gets tied up inside the item I am making and some of it can be accessed at a later date - not all of it, but just a feeling, a tinge, a window back in time. I can still remember 'what I was doing' with many of the things I have made, although the memories sometimes fade over time to one specific thought or window instead of many. There is a little bit of that 'spacetime' feel of the book to that for me... and where those thoughts lay across each other, melding and coagulating, I feel the most at home. Something I have made, that will last, and be a joy, and 'contain' all of the memories created during the making and the using of it. Then, I feel I have done well.

Things I love lately: Esme, when faced with something she didn't want, says 'Wait wait wait I need to think about this!' ie: Daddy put on a different movie than the one she was asking me about last night and she said that again. The first time I recall it was when I mixed iced tea with her watered-down juice one day because I thought it tasted good in my glass (and we were low on juice). She saw me mixing the two things and said 'wait wait' because she knew that was her glass and she was unsure if that was a good idea for her. She did like it, though. She is trying more new things like that.

Last night she asked Daddy for a 'bologna and pork sandwich.' And Daddy made it for her - a slice of bologna and ketchup sprinkled over with barbequed shredded pork on two pieces of bread. We giggled at the idea, which she has brought up before and was at that time dismissed (we had just made the pork and did not think she was serious). She ate the entire sandwich and was happy about it. OK then, our weird child...what should we expect? And last night after I made the chair pad Esme wanted to try it out. She sat down on it and then asked me for my glasses. She wanted to try it out 'in full' and pretend to be Mama the way I was doing it. No dice kid, I keep the glasses, but nice try!
Posted by RheLynn at 5:12 AM